The Gastown walking tour introduces you to the historic centre of Vancouver.

Once a ragtag settlement, Gastown and adjoining land were incorporated as the City of Vancouver in 1886. During the city's boom years, it attracted wholesalers and warehouses to its location near the wharves and railroad tracks. But after the 1920s, Gastown became a quiet backwater of deteriorating buildings. It wasn’t until the 1960s that the public began to appreciate Gastown's distinctive architecture and role in the city's history, and undertook to revitalize the area.

The tour takes about two hours and starts at Maple Tree Square at the intersection of Water and Carrall Streets. Walk the tour during business hours so that you can see interior renovations as well. Many Gastown businesses are open on Sunday for the convenience of tourists. 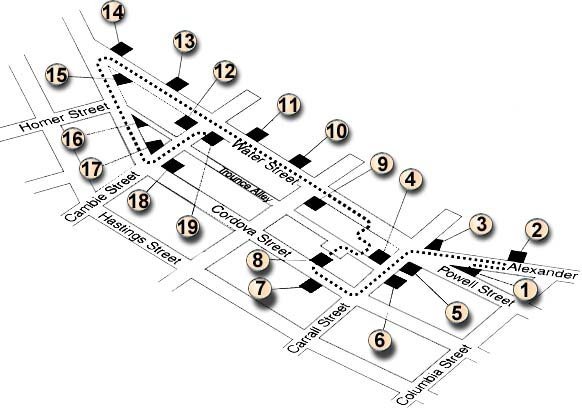 See photos and descriptions of the buildings indicated on the map.

Gastown's beginnings sound like a salty tall tale. In 1867 garrulous Captain John "Gassy Jack" Deighton floated a barrel of whiskey ashore on the south side of Burrard Inlet. He persuaded workers in the nearby sawmill to build a saloon for him, and days later he was in business. The village of Gastown, as it became known, was officially surveyed as "Granville" townsite in 1870. Its hotels, saloons, and shops served workers at the nearby Hastings Sawmill. Then, in 1884, the small village received word that the Canadian Pacific Railway would extend its tracks to the townsite. The railroad promised a grand future for Gastown, and real estate speculators were determined to cash in on it. Speculation forced land prices to increase threefold as lots that sold for $300 in March 1886 fetched $900 in May of the same year.

On June 13, 1886, shortly after Gastown and adjacent lands were incorporated as the City of Vancouver, a clearing fire in Yaletown blazed out of control and in 20 minutes burned the townsite to the ground. This tragedy was also an opportunity for Vancouver. The city benefitted from the instant removal of stumps and ramshackle buildings, and especially from the international publicity Vancouver received.

In 1887, when the first CPR trains reached Vancouver, travellers and investors found a thriving city. Gastown's many hotels were crowded with speculators and lumberjacks, miners and would-be millionaires. A business district, including the Gastown area, emerged, roughly following the boundaries set by the 1887 Fire Limit Bylaw. Within those bounds, all new construction except sheds and privies had to be of brick or stone. Imagine the view at the intersection of Carrall and Water Streets (now Maple Tree Square) as substantial brick and stone buildings replaced makeshift wooden ones lost in the fire.

Gastown was one of several competing commercial areas in the city. Another was at the intersection of Hastings and Main Streets. The CPR encouraged a third on their land grant to the west. To lure commerce, the CPR built the first Hotel Vancouver at the corner of Granville and Georgia Streets in 1887, and in 1891 erected an opera house behind the hotel.

To generate traffic for the transcontinental, the CPR devised a freight rate structure that favoured Vancouver and began running its own steamships to Asia. Gastown became the transfer point for goods moving in and out of the city by rail and ship.

By the 1890s, settlers were moving on to the Canadian prairies, and miners heading to the Kootenays and the Klondike. Vancouver's boom began in earnest as towns and mining camps provided new markets for goods. As the downtown's commercial centre moved west, a specialized warehouse district developed in Gastown, crowded between the CPR tracks along the waterfront and the retail shops lining Hastings Street. On the north side of Water Street, the backsides of old warehouses still offer glimpses of loading docks opening onto the CPR tracks.

Wholesalers, like grocers Kelly Douglas and W.H. Malkin, took advantage of Vancouver's position at the meeting place between the railways and the trans-Pacific steamers. They imported coffee, tea and spices, storing them in their Gastown warehouses. Then the entrepreneurs repackaged the groceries and distributed them throughout the province. By 1913 the Gastown area was so crowded with warehouses that a second warehouse district was established, near the CPR yards in Yaletown.

Gastown recovers from hard times in the interwar years

Vancouver's economic boom collapsed in 1914, and World War I delayed the recovery. By the 1920s when building resumed, most new commercial construction took place west of Gastown. In Gastown itself, a few warehouses were built or enlarged. During the 30s, 40s and 50s, Gastown, once the heart of Vancouver, became a virtual backwater. Even warehousing shifted out of Gastown, moving to the suburbs where land was cheaper and highways close by. Hotels that had once catered to passengers from the railways and steamships deteriorated. Many were converted into rooming houses, providing cheap lodgings for seasonal labourers between jobs and the city's long-term unemployed.

For Gastown, hard times and obscurity were a blessing in disguise. With little pressure for new development, street after street of brick and stone buildings from Vancouver's early years survived into the 1960s.

At that time, business leaders, alarmed by competition from the suburbs, began to plan for downtown redevelopment. A consortium of local and international companies planned "Project 200" for the Gastown area – 36 highrises and other smaller buildings constructed on a deck over the CPR tracks. But the recently completed Pacific Centre complex had raised awareness of the impact of highrise development on city views and social life. Furthermore, Project 200 depended on a waterfront link with a proposed freeway through Chinatown, which citizens successfully opposed.

Finally, in 1968, the Community Arts Council, recognizing Gastown's special historical and architectural interest, organized walking tours through the district. Six hundred people took a fresh look at Gastown. What they saw motivated private developers to renovate and preserve individual buildings. The City and local property owners, seeing an opportunity to revitalize the entire area, funded the beautification of Maple Tree Square, installed new street lamps and furniture and "bricked" streets and sidewalks. In 1971 the Province designated both Gastown and Chinatown historic districts.

Gastown's rediscovery has been fuelled by tourists from the nearby cruise ship facilities attracted to the area’s shops and restaurants located in renovated buildings like The Landing. The area’s resurgence can also be attributed to the conversion of several warehouse buildings to residential use along Alexander and Water Streets, leading to an increase in the resident population, which bodes well for local businesses but has created tensions with long-term low-income residents.