We protect Vancouver's spectacular ocean and mountain views while promoting density in the downtown area. The mountains behind our city skyline signify our connection to nature and align with our sustainability goals.

However, the downtown peninsula has limited land available for development because of its geographic boundaries. To reduce urban sprawl, we consider higher buildings that don't impact the protected view corridors.

In consultations with the community, we have identified several locations from which both residents and visitors can appreciate the uninterrupted views of the North Shore mountains, the Downtown skyline, and the surrounding water.

Preserving these views ensures that Vancouver maintains its connection to nature while the city expands.

Recently, staff have conducted two major reviews to ensure that urban development is possible while maintaining the view corridors. The two reviews were:

November 20, 2013 – As part of West End Community Plan implementation, Council approved amendments to the General Policy for Higher Buildings. The amendments clarify circumstances when the policy applies to proposals for higher buildings in the West End adjacent to West Georgia Street and Burrard Street.

February 1, 2011 – Council passed the final approval on the addition of four new views into the City's View Protection Guidelines and seven sites into the General Policy for Higher Buildings. Read the amended policies:

The public hearing of the Historic Area Height Review items relating to Chinatown was heard over several days. Here are the key documents that came out of the public hearing:

During the course of developing the Higher Building Review, Council met several times to provide direction. Here are the Council reports:

Here are some of the key research documents planning staff used when creating the higher building review strategy:

City staff explored opportunities for additional height and density in the Historic Area to support heritage conservation projects, low-income housing, and other public benefits and amenities.

The Historic Area Height Review had several objectives guiding the study and its outcomes:

Staff reviewed existing heights and view corridor policies in the downtown and suggested changes to support job and resident growth as well as public benefits.

The Higher Building Review helped staff determine which views were most important to the public. This information helps the City's work to preserve those views and determine where to strategically add taller buildings.

The City held open houses in June 2009, October 2009, and October 2010 to get the public's feedback on higher buildings outside of the view corridors.

Every view corridor - also called a view cone - has a set of elements that define it:

The view origin is the view point that the average (5'6" tall) person would have of the corridor.

Diagram of the view corridor elements

In 1978 and 1979 the City conducted two surveys to capture the public's goals for Vancouver. In the surveys, residents identified their highest priorities including preserving the views of the shoreline, the downtown skyline and the North Shore.

In the late 1980s, the City began plans to develop in the south side of downtown and along the north shore of False Creek. It was possible that - without a structured approach to building height limits and location - views of the downtown, the mountains and the False Creek waters could be blocked by buildings.

In 1988, the City began the Vancouver Views study to better understand the public's perspective. The study resulted in a proposed view protection policy and established the City's protected view corridors.

In 1989 the City of Vancouver approved the View Protection Guidelines containing 26 protected view corridors. The policy protects the view of the north shore mountains, the downtown skyline and False Creek from a number of public view points along the south shore of False Creek, arterial roadways, and from the Granville and Cambie bridges.

Since then, a number of new buildings have been added to the downtown skyline. The protected view corridors help determine the site location and design of buildings, resulting in the retention of panoramic and narrow views downtown. 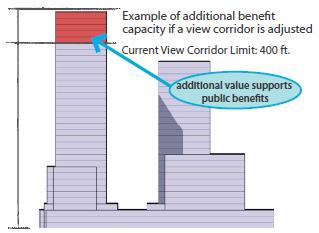 Benefit capacity is additional density - approved by Council through a rezoning - that the City also gets public benefits from.

The need to assess benefit capacity was highlighted in July 2007, leading to the Metro Core jobs and economy study and the Heritage Building rehabilitation program and transfer of density bank report. These reports showed a short term supply of benefit capacity in the downtown official development plan area. There was approximately 3 million square feet of benefit capacity available.

Based on this information, City Council requested a study to identify longer term development capacity in the downtown.

All questions are required unless marked optional.