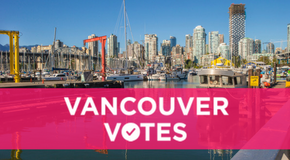 Today, the City of Vancouver’s Chief Election Officer has declared the candidates elected with the highest vote totals in the October 20, 2018 Vancouver city election. The election verification process is complete.

Those elected will serve for a four-year term until the next Vancouver city election in 2022.

Office of the Mayor (1 elected)

Office of Park Board Commissioner (7 elected)

Vancouver voters also voted on three capital plan borrowing questions, which will provide infrastructure funding from 2019 to 2022. The official results are below.

The 2018 city election had a large number of candidates (158), resulting in a longer than usual ballot which caused paper jams in the vote counting machines at some locations. The election verification process this year included recounting approximately 57,156 ballots from 50 voting places. These voting places were selected based on:

As a result of this significant review, there are minor vote changes from the preliminary results for many candidates, but the final results do not change the final election standing.

The full vote counts are now available. Results by voting place will be available on the website within the next few weeks. A full download of election data will be available later in the fall, in the open data section of the City website.