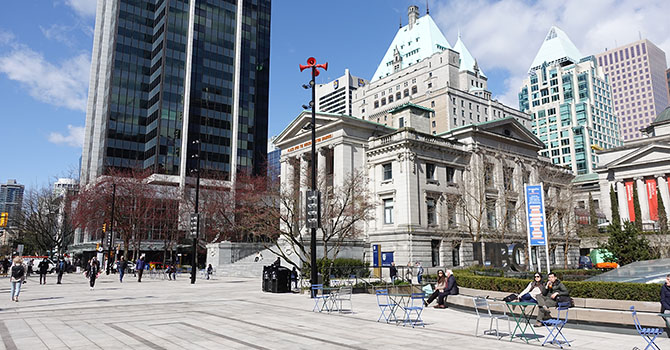 A vibrant new permanent public plaza in the heart of downtown

Located in the heart of our city, 800 Robson is Vancouver's next great public square and will no doubt become an iconic and vibrant destination where people can come together to celebrate, speak out, perform, connect, or just relax.

Today, the section of Robson Street that sits between the art gallery and the Law Courts will re-open as a permanent, public plaza.

As the weather improves and social gathering becomes safe again, the area will be a welcoming space for community events, supporting civic and creative expression, thanks to a partnership with the Provincial government and TransLink.

While the pandemic has highlighted the need to provide people with outdoor space to move and safely socialize, we've long been taking steps to create more public space. The completion of the public-plaza project at 800 Robson Street is the culmination of Arthur Erickson’s vision for the area dating back to the 1970s.

The area that includes the Vancouver Art Gallery, 800 Robson Street and the Law Courts has long been the heart of downtown Vancouver and a key gathering place for residents and visitors. As a popular location, the area was transformed into a pop-up plaza during the 2010 Olympic Winter Games. In the years that followed, we created a seasonal temporary plaza at this location, enabling the community to test the location as a potential permanent plaza.

Renovations for a year-round public plaza

After extensive engagement with the public and local business community and following Council direction, we permanently closed the area to traffic in 2016 and in 2019 work began to construct a year-round public plaza. Today, the section of Robson Street south of the art gallery has been converted into a permanent place for people to gather. Renovations include:

The project was funded through a partnership between the City of Vancouver, the Government of BC, and Translink.

The Provincial government supported the project on several levels. The Ministry of Transportation and Infrastructure provided funding through its Bike BC program, while the Ministry of Citizens’ Services led the delivery of the project.

TransLink provided funding through its Walking, Cycling, and Roads program.

The opening of 800 Robson Street as a permanent public plaza aligns with several of our policy objectives regarding community building, active transportation, and climate change. It also supports our ongoing efforts to re-allocate road space to support residents and businesses through the pandemic.

“This past year has proven just how important great public spaces are to strengthening our sense of community and giving people a place to connect with each other,” says Mayor Kennedy Stewart. “Located in the heart of our city, 800 Robson is Vancouver's next great public square and will no doubt become an iconic and vibrant destination where people can come together to celebrate, speak out, perform, connect, or just relax. Creating a welcoming space was Arthur Erickson’s vision for the area and we are happy to have brought his vision to completion with the support of our partners.”

“We’re proud to partner with the City of Vancouver to deliver such an important public project,” says Lisa Beare, Minister of Citizens’ Services. “When we can socialize and come together again, this beautiful outdoor plaza will provide a safe and accessible space for people to reconnect and enjoy community events for years to come.”

“TransLink has an important role in helping to build and improve many walkways, cycling paths, and roads throughout Metro Vancouver,” says TransLink’s Acting Vice President of Engineering, Jeff Busby. “As the regional transportation authority, we are committed to connecting people and communities by improving mobility for everyone, no matter how you primarily travel. These improvements make it easier to walk or cycle in the area, and will make Robson Square a great place to relax or gather with friends once it’s safe to do so again.”