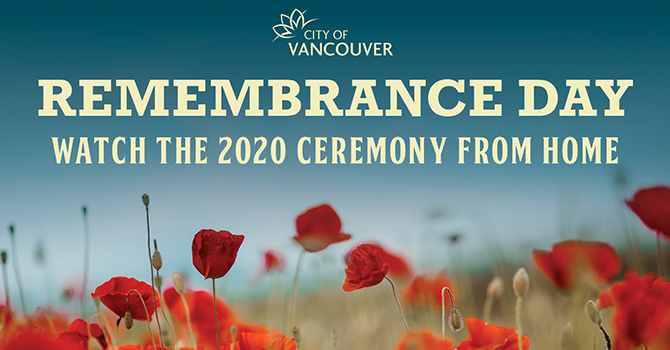 City reminding residents to Remember In Place on November 11

A modified version of Vancouver’s annual Remembrance Day ceremony will be held at 10:30am on Wednesday, November 11, to honour Canada’s veterans, and to mark the 75th anniversary of the end of the Second World War.

The City of Vancouver and the Vancouver Remembrance Day Committee are reminding the public to #RememberInPlace and honour Canada’s veterans by watching this year’s ceremony safely from home.

Members of the public are asked to avoid the ceremony site this year.

The Remembrance Day Service is organized by the Vancouver Remembrance Day Committee, a volunteer group established by the City in 1946 with the mandate to conduct the ceremony every November 11 on behalf of its citizens.

Last week, students from Shaughnessy Elementary School installed a display of red poppies on the grounds of Vancouver City Hall at the corner of West 12th Ave and Cambie St. This is the sixth year students have installed poppies at City Hall. Students also placed red feathers to recognize Indigenous veterans, for the second year in a row.