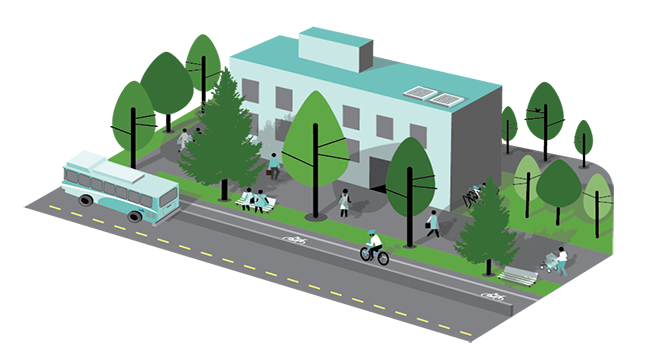 The interim target to increase carbon capture projects in the city is a win-win for residents, visitors, businesses, and the climate.

Council confirmed their commitment to climate action by approving a report to support and enhance nature-based climate solutions to capture carbon on public and private land in the city.

As one of the core actions identified in the Climate Emergency Action Plan (CEAP), natural climate solutions focus on capturing carbon pollution from the atmosphere and storing it in living systems.

This is achieved by managing ecosystems in a way that reduces climate impacts and supports biodiversity. It mitigates climate change by removing carbon from the atmosphere and supports adaptation through improving storm-water management, decreasing flood risk, and reducing urban heat island effect by increasing trees, vegetation, green roofs and wetlands, and restoring soil, marine vegetation, and marshes.

Today, Council approved a number of quick-start natural climate solution actions that, dependent on budget approval, City staff, and Vancouver Board of Parks and Recreation, will implement over the next four years to 2025.

Natural climate solutions provide a great opportunity to take an equity-based approach to climate resilience and actions to better serve the community, which means we’ll be looking for opportunities to increase our urban forest canopy in neighbourhoods that don’t have these assets and have high summer temperatures.

Longer-term efforts to advance natural climate solutions within the city will be done via the Vancouver Plan’s ecological networks, which will serve as a backbone for our carbon sequestration efforts and provide a way to integrate natural climate solutions with urban growth. The Vancouver Plan is expected to be brought to Council for approval in June 2022.

Vancouver committed to take climate action to do our part to limit global temperatures to 1.5°C, as recommended by the UN’s Intergovernmental Panel on Climate Change (IPCC) to avoid irreversible and catastrophic climate change.

All pathways the IPCC modeled to limit warming to 1.5°C include negative emission actions, which means removing carbon from the atmosphere. Carbon removal technology is still new and emerging, but capturing and storing carbon in natural systems is proven and provides many co-benefits for people and ecosystems.

Natural climate solutions means sequestering carbon from the atmosphere into living systems, which can either be land-based or ocean-based.

There are many benefits for people and ecosystems, such as reduced temperatures due to more tree canopy, better managing rainwater so that it doesn’t flood our streets, and more biodiversity.

Learn more about how we capture carbon pollution.

“The interim target to increase carbon capture projects in the city is a win-win for residents, visitors, businesses, and the climate,” says Mayor Kennedy Stewart. “The benefits for people and ecosystems include reduced temperatures due to more tree canopy, better managing rainwater so that it doesn’t flood our streets, and more biodiversity.”