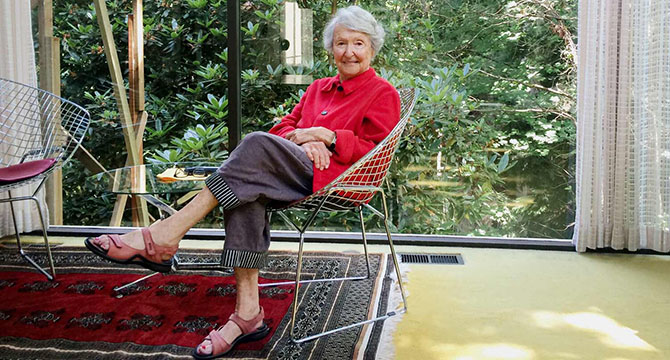 Cornelia Hahn Oberlander honoured with Freedom of the City Award

Cornelia Oberlander was one of Vancouver's most renowned Jewish residents, and during Jewish Heritage Month this May, we honour her outstanding accomplishments in bringing world-class landscape design to Canada, and to Vancouver in particular.

Vancouver City Council has bestowed the Freedom of the City Award on Cornelia Hahn Oberlander, CC, OBC, a pioneer in landscape architecture and a beloved member of Vancouver's Jewish community. Council approved the award on May 18, 2021, days before Cornelia Oberlander passed away on May 22 at the age of 99.

After escaping Nazi persecution in Germany at the age of 18, Oberlander immigrated to the United States via England, and graduated among the first class of women from Harvard University with a degree in landscape architecture. She later settled in Vancouver and founded her own landscape architecture firm, bringing with her a vision of urban environments with pockets of nature that continues to shape our cityscape.

Oberlander also made her mark nationally and internationally. She designed landscapes for non-market housing and playgrounds across the country, helped draft national guidelines for the creation of play spaces in Canada, and worked on major projects like the National Gallery of Canada, and the Canadian Chancery in Washington, DC. ​​​​​​​

The Freedom of the City is our most prestigious award, an honour reserved for individuals who have gained national or international acclaim in their field and brought recognition to Vancouver through their work. We began granting the Freedom of the City Award in 1936. Recipients have their names inscribed in the Book of Freedoms.

Nominations are submitted by City Council members and must be approved by a unanimous vote of Council. Oberlander's nomination was supported by the Jewish Federation of Vancouver, the Centre for Israel and Jewish Affairs, and the Jewish Museum and Archives of British Columbia in honour of Jewish Heritage Month.

Learn more about the award and previous recipients

"Cornelia Oberlander was one of Vancouver's most renowned Jewish residents, and during Jewish Heritage Month this May, we honour her outstanding accomplishments in bringing world-class landscape design to Canada, and to Vancouver in particular," said Mayor Kennedy Stewart. "On behalf of Council, I extend my deepest sympathies to her family and friends. May her memory be a blessing." ​​​​

Ezra S. Shanken, CEO of the Jewish Federation of Vancouver

"Cornelia Oberlander was a true icon of our Jewish community. The Freedom of the City Award honours Cornelia's lifetime of accomplishments in a month that celebrates the impact that Jewish Canadians have had on society as a whole," said Ezra S. Shanken, CEO of the Jewish Federation of Vancouver.