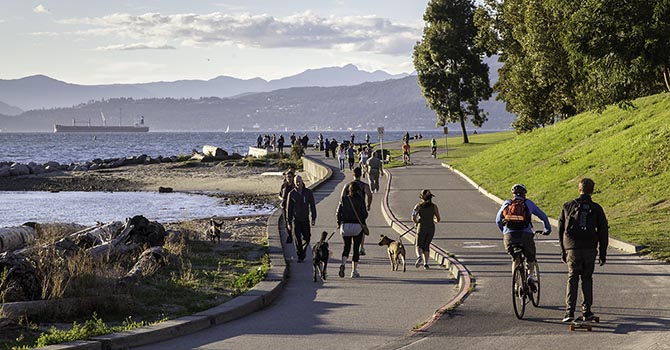 Help imagine the future of one of the city’s most iconic areas: the West End Waterfront

The Vancouver Board of Parks and Recreation and the City of Vancouver invite the public to share their thoughts, visions, and ideas to help shape the city’s West End Waterfront for the next thirty years.

The West End Waterfront, commonly known as English Bay, Sunset Beach Park, and Beach Avenue, is one of the most popular and best-loved public spaces in all of Vancouver. Residents and visitors gather along this shoreline to experience nature and sweeping views of English Bay, the Salish Sea, and Vancouver Island, while enjoying recreational activities on and off the water, and connecting with the ocean and one another.

This stretch of shoreline is located on the unceded, ancestral, and traditional territories of the xʷməθkʷəy̓əm (Musqueam Indian Band), Sḵwx̱wú7mesh (Squamish Nation), and sə̓lílwətaʔɬ (Tsleil-Waututh Nation) and represents a place of great cultural, spiritual, and ecological significance. The Vancouver Board of Parks and Recreation and the City are working with the Musqueam Indian Band, Squamish Nation, and Tsleil-Waututh Nation as rights and titleholders of these unceded lands to seek their involvement in the project, and to support their continued access to the shoreline and waters. The engagement process and resulting plan aspires to deeply reflect that Musqueam Indian Band, Squamish Nation, and Tsleil-Waututh Nation have always been and will continue to be stewards of this place.

A  West End Waterfront that works for everyone

The West End Community Plan identified the need for long-term improvements to the transportation system, parks, and public spaces in the area to support substantial growth in the West End, alongside mitigating current and future impacts from: a continued rise in tourism; new and increasing pressures brought on by climate change; rising sea levels; aging infrastructure; and park amenities.

With the community’s ongoing input, the goal is to create a robust, sustainable West End Waterfront that works for everyone. And this is just the start. Over the next two years, there will be future opportunities for the public to get involved and help shape the future of one of the city’s most iconic areas.

Opportunities to get involved