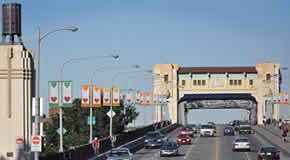 Construction of new heritage-style lamp posts and installation of new suicide prevention fencing will begin this November on the west side of the Burrard Bridge.

The final design of the new bridge fencing was designed in collaboration with a stakeholder group made up of representatives from:

Fencing was recommended by the BC Coroners Service and the BC Ministry of Transportation and Infrastructure.

“We applaud the City of Vancouver for adding the barriers,” says Vancouver Coastal Health Medical Health Officer Dr. Emily Newhouse. “This new fencing will save lives. The research shows that suicide attempts from bridges are impulsive. Generally, if someone is prevented from jumping off a bridge, they don’t try other means of killing themselves.”

The City and the stakeholder group considered several designs, including netting below the bridge, glass fencing, and several fence designs. A picket fence design with vertical detail and heritage style pedestrian lamp posts was selected as the final option for several reasons, including:

“This landmark rehabilitation project will enhance the Burrard Bridge’s condition into the future, as well as maintain and enhance its heritage features,” explains Donald Luxton, heritage consultant for the bridge’s rehabilitation. “The project team carefully reviewed each proposed intervention against the Standards and Guidelines for the Conservation of Historic Places in Canada. The most significant addition for heritage advocates is the restoration of the long-lost pedestrian light fixtures. When the work is complete this venerable heritage bridge — one of the few true Art Deco bridges in the world — will have a new lease on life.”

Public health and safety is of the utmost priority for the City. If you or someone you know is in crisis or distress, call 604-872-3311 in Vancouver or 1-800-Suicide anywhere else in BC.

The upgrades to Burrard Bridge and Pacific Street intersection were approved by Council in July 2015.

Learn more and see renderings of the bridge modifications