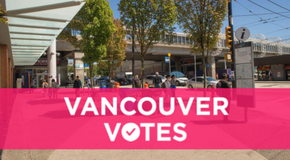 Approximately 176,744 ballots were cast and voter turn-out is estimated to be about 39.43%. 158 candidates ran in races for mayor, councillor, Park Board commissioner, and school trustee.

The official election results will be declared by the Chief Election Officer by October 24, 2018. The unofficial results are as follows:

Vancouver voters also voted on three capital plan borrowing questions, which will provide infrastructure funding from 2019-2022. Unofficial results are below.

The voting results will be available for public inspection at the City's election office until November 23.

It is possible to seek a judicial recount in Provincial Court, and to challenge the right of an elected candidate to take office, or the validity of an election in B.C. Supreme Court.

The inauguration ceremony for the newly elected officials will take place November 5. Details will be released closer to that date.

969 ballots were cast over two days, with voters sharing answers to three questions about city services and community participation. The top answers for each question are below.

In Vancouver, what is most important to you?

Which elected role would you like to have in Vancouver?

What is one way you are active in your city?

My coffee, my vote competition

Voting took place from October 1 to 20, and the drink that received the most votes is The Vanmewver from Catfe (63 votes, 32% of vote).