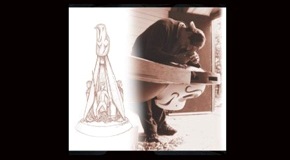 The Vancouver Board of Parks and Recreation received a public art donation proposal from the Portuguese Joe Memorial Society.

The site of the sculpture is Brockton Point in Stanley Park, the historical location of a small community which Silvey and his first wife Khaltinaht were part of.

The work celebrates the ancestral connection of Coast Salish and Portuguese communities in Vancouver.

In evaluating the Portuguese Joe Memorial Society proposal to erect a sculpture at Brockton Point in Stanley Park, the standard Park Board artwork donation process was followed.

Progress with this initiative

Archaeological deposits prompt a new location for the sculpture

May 2014 – The construction is set to begin in the new location, shown below.

April 2014 – Due to archaeological sensitivity of the original site, the location for this monument has been adjusted. This decision was reached with the approval by the Park Board General Manager and agreement with Musqueam, Squamish, Tsleil-Waututh and Sto:lo First Nations and after notification to the adjacent stakeholder, Legends of the Moon.

March 2014 – The initial archaeological testing on site resulted in discovery of cultural deposits, and the construction was put on hold until an alternate location for the artwork was selected.

October 15, 2013 – Park Board staff are reviewing the contractual agreement with the donor and preparing for construction to begin in spring 2014.

What do you think about this proposal?

May 13, 2013 – The result of the public consultation will be presented to the Board Commissioners for consideration. For more information about the staff report and meeting details please visit the Park Board website.

April 12, 2013 – A public consultation process on the project including Stanley Park stakeholders is underway. Our online questionnaire ended April 30, 2013.

Park Board staff have conducted a review and given preliminary approval for site with a requirement for archeological oversight.

December 10, 2012 – The Public Art Committee conducted the review of the artwork and gave approval.

Who was Joe Silvey?

Portuguese Joe Silvey was a “Renaissance Man” of his generation, who came to BC in 1860 on a whaling schooner and tried his hand in gold-mining and many other professions. He settled in Vancouver and married his first wife Khaltinaht, Chief Kiapilano’s grand-daughter and moved to the area now called Brockton Point where other European and First Nations families lived.

The Park Board received a proposal from the Portuguese Joe Memorial Society to erect a sculpture highlighting ancestral connection of Coast Salish and Portuguese communities in Vancouver at Brockton Point in Stanley Park.

Get more information about this initiative