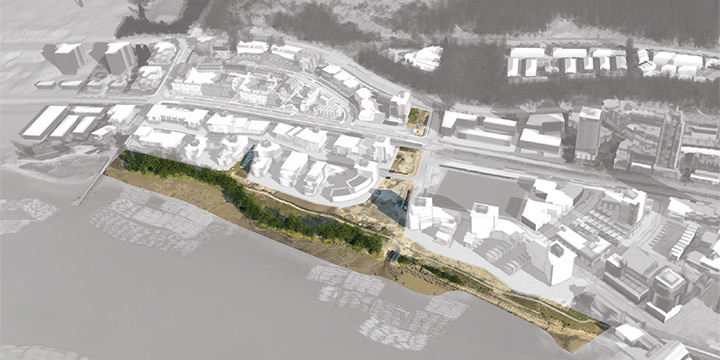 East Fraser Lands (EFL) is being developed by Wesgroup to house up to 12,000 new residents in the coming decades.

To compliment this development, the Vancouver Park Board is committed to designing and constructing 25.2 acres (10.2 hectres) of parks within the community – approximately 20% of the land area.

In 2016 and 2017, the Park Board undertook a community engagement process for 7.8 acres of these parks including Foreshore Park, Kinross Park, and Neighbourhood Park South. The designs were approved by the Park Board in late 2017 and the detailed designs evolved through 2018 and 2019. The design process is also underway for a new park at Sawmill Crescent and Marine Way, with public engagement opportunities in late summer 2020.

Neighbourhood Park South was opened to the public in September 2019. The northern portion of Kinross Park will begin construction in summer 2020. Foreshore Park and the southern portion of Kinross Park require further coordination with the developer (Wesgroup) and the acquisition of permits from the Province of BC prior to commencing construction.

Construction of the north and middle portion of Kinross Park completed in summer 2021, and the two new neighbourhood parks are now open to the public.

Construction of South Kinross Park is estimated to begin in spring 2022.

Read the summary document for information regarding the entire design process and preferred design directions for the parks moving forward.

We held an open house on September 9, 2017 for you to view revised designs for future park lands and complete a questionnaire.

The latest designs include the areas in the:

The designs are the result of an earlier open house that the Vancouver Park Board hosted in October 2016. They include strategies related to flood protection and future sea-level-rise.

Thank you to everyone who participated.

We held an open house on October 15 for you to learn about:

As well, we asked what you thought about the draft principles and design options for the parks in an online questionnaire from October 14 to 31. Thank you to everyone who participated.