Stanley Park has an abundance of beautiful flower gardens. Consider visiting them between spring and fall each year to see the flowers in bloom. 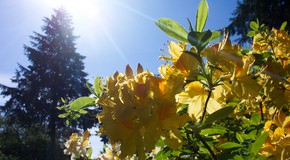 The Park Board received an extensive collection of hybrid rhododendron and azalea plants in the late 1960s.

This collection of plants came from the Royston nursery belonging to Ted and Mary Greig, who were renowned rhododendron hybridizers.

In all, about 4,500 plants are planted around the Stanley Park Pitch & Putt golf course.

The Ted and Mary Greig Rhododendron Garden is at its peak during the first two weeks of May. However, walks through the garden are always rewarding any time between March and September because there is always something in bloom. 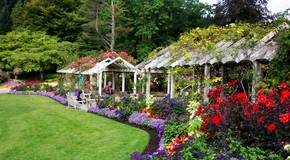 The Stanley Park Rose Garden, first established in 1920 by the Kiwanis Club, boasts over 3,500 rose bushes, as well as a stylish west coast-inspired arbour supporting a combination of climbing roses and clematis.

Floral display beds slope downward toward the causeway and extend up to the Stanley Park Pavillion, providing seasonal spectacles of colour with annuals and perennials from June to October and flowering bulb displays from March to May. 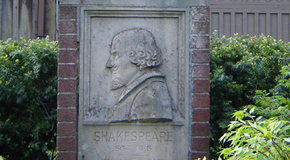 Nestled between the Rose Garden and the forest in Stanley Park, the Shakespeare Garden pays homage to The Bard.

The garden is a diverse arboretum that includes trees mentioned in his plays and poems.

There are about 45 trees that form the arboretum that accompanies the monument. Trees designated from the works of Shakespeare have been affixed with plaques that display their appropriate quotes. These Shakespeare trees are integrated throughout the arboretum for visitors to find as they explore the garden. 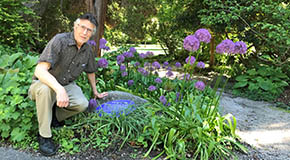 The first public garden of the city was created from 1911 to 1920 by master gardener John Montgomery from unwanted boulders excavated for the adjacent Stanley Park Pavilion. Stretching from Pipeline Road to Coal Harbour, this garden was partially abandoned by the early 1950s, its story forgotten.

Its rediscovery began when Chris Hay, great grandson of John Montgomery, started researching his family history and a windstorm on December 15, 2006 revealed the garden.

After years of research and lobbying by Hay, the rock garden was recognized as one of Vancouver's “Places that Matter,” added to the Vancouver City Heritage Register, and listed on the Canadian Register of Historic Places External website, opens in new tab.