History of the heron colony in Stanley Park

The earliest known record of these magnificent birds dates back to a 1921 photo by Leonard Frank of a colony near Brockton Point. It is quite likely that the birds inhabited Stanley Park years before this image was captured, too. Even back then, people were fascinated by the great blue herons.

Location of the colony

The location of the colony has changed a few times since 1921. When and why the herons change nesting locations is not fully understood.

Other locations of nesting trees after Brockton Point include:

Learn more about the herons and view the heron cam 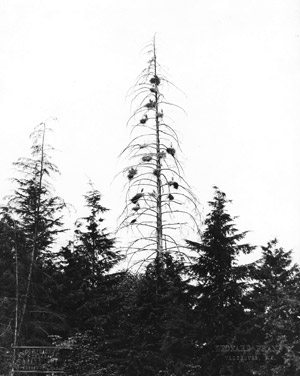