The Seawall in Vancouver

April 8, 2020: The seawall from Stanley Park to Hornby Street is closed to cyclists and experienced rollerbladers, who may use temporary bicycle lanes on Beach Avenue and Park Drive.

Learning rollerbladers may use the seawall.

Vancouver has the world's longest uninterrupted waterfront path. The 28 km Seaside Greenway is an uninterrupted pathway, including the Stanley Park Seawall, that extends from the Vancouver Convention Centre to Spanish Banks Park. Perfect for a walk, cycle, or jog, it is the most popular recreational spot in the city.

The Seawall is divided in to two clearly marked sections - one for walkers and joggers (closest to the water), and one for cyclists and inline skaters (inside path).

Be sure to follow the signs to make sure you use the seawall safely, especially on sunny summer days and weekends when the area is particularly busy.

Printable map of the Seawall 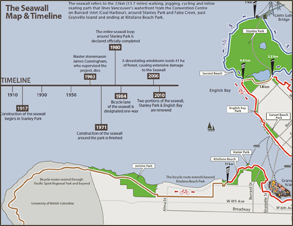 Click the image, above, to view a printable map that fits on a 8½×11-inch sheet of paper. 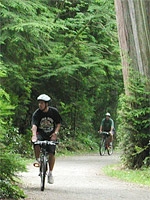 Walking and cycling around Stanley Park on the Seawall

The 9 km portion around Stanley Park takes two to three hours to walk, or one hour to cycle.

History of the Seawall

Construction of the Seawall began in Stanley Park in 1917. Much of its incremental progress was overseen by Park Board master stone mason James Cunningham from the late 1920s until his retirement 35 years later.

A plaque commemorating Cunningham's work can be seen in the rock face above the Seawall at Siwash Rock.

On September 21, 1980, the entire Seawall loop around Stanley Park was declared officially completed with the final paving between Third Beach and Second Beach.

Since 1980, the Seawall has been extended outside of Stanley Park.

In 2010 and 2011, two portions of the Seawall, Stanley Park (near Second Beach) and English Bay (near Sunset Beach), were renewed to address ongoing concerns with erosion.

With deep foundations and renewed surfacing, the new Seawall is built to withstand the tides for many years to come.

About the smoking bylaw

EasyPark manages parking lots throughout Vancouver, including lots in parks, beaches, and theatres.

Find parking lots and pricing by visiting the EasyPark website.