This linear walk, located in the West End of Vancouver, is 2 km, or approximately 2,624 steps in one direction. It begins at Sunset Beach and follows the seawall along English Bay. This 13.44 hectare area of linked green space is an important feature at the southern extent of downtown Vancouver. These accessible waterfront parks represent a long held vision of the Park Board to make the entire waterfront area of downtown Vancouver public recreation space.

With its seascape, historic Bathhouse and iconic Inukshuk, the seawall walking route between Sunset Beach and English Bay makes the list of world class Destination Walks within the City of Vancouver.

Vancouver's beaches and publicly accessible seawall are a favourite amenity among locals and visitors alike. The accessibility of the waterfront has positioned Vancouver as one of the most livable cities in the world, as well as one of the most walkable. Come stroll along the waterfront route and discover the rich history, culture, amenities, and many benefits of walking in one of Vancouver's premier destinations.

This walk follows the seawall which is made up of paved pedestrian and cycling paths. It is wheelchair accessible throughout. 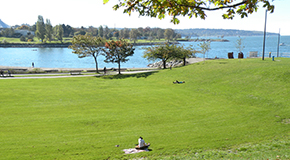 At Sunset Beach Park, False Creek opens up into English Bay, and the waterfront becomes a sandy beach. Across the Creek, you will see Vanier Park and past Spanish Banks to UBC. West Vancouver and the North Shore mountains are also in sight. The vast open water of the Salish Sea is an inspiring view, and there are always people resting on the benches or logs taking in the grandeur. 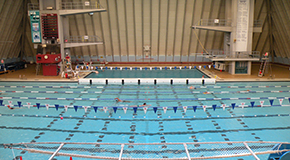 The Vancouver Aquatic Centre, a large indoor pool which opened to the public in 1974, is found on Sunset Beach side of the Burrard Street Bridge. It provides a place for the public year around and is open daily for lane and public swimming as well as lessons.

This facility is part of Vancouver’s Fire Protection System. In the event of a major disaster that disables the City’s conventional water supply system, the Jervis Pump Station will provide salt water for firefighting. 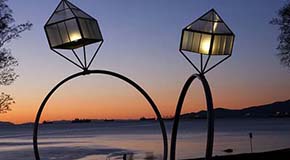 Engagement, is one of several versions American artist Dennis Oppenheim has produced referencing the traditional engagement rings. In a "Pop Art" form where everyday domestic objects are taken out of their domestic environment and re-conceptualized as monumental sculptures, this version of Engagement rises nearly 30 feet. Sitting on top of the rings where the diamonds would be traditionally, there are two translucent houses of plexiglass and aluminum, illuminated and precariously tilted away from each other. 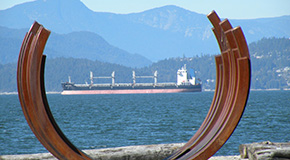 This sculpture was part of the 2005-2007 Vancouver Biennale and is now a legacy piece placed in Sunset park near the intersection of Jervis St and Beach Ave. 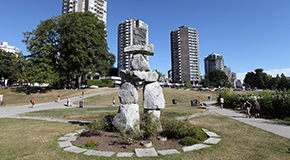 "Shaped like a five-story igloo," this welcoming figure was made on the Inuit model for the North West Territories pavillion at Expo 86 and was designed by Bing Thom. The figure was sited at English Bay after the fair.

The stones were brought in from a quarry in the Fraser Valley and then shaped and stacked by crane and pinned together with rebar. Inukshuks in the north are usually much smaller and the rocks are balanced on each other. They act as sign posts or distance markers that can be seen on the flat horizon. Artist Kanak said, "By a lake an Inukshuk means lots of fish." The figure is a "reminder of the ingenuity of my people in addressing transportation and communications challenges prior to the introduction of modern technology." (sources: M.Farrow, V.Sun, April 24, 1985; V.Province, May 5, 1985) 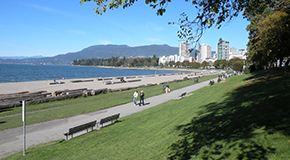 The name English Bay commemorates the meeting of European explorers in 1792. Captain Vancouver and his British crew came into contact with the Spanish fleets under Captains Valdes and Galliano. This event led to the naming of English Bay and the Spanish Bank. 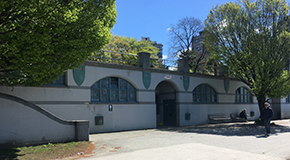 In the early 1900’s, the original wooden bathhouse was built, further establishing English Bay as a location for public recreation. A pier with a glassed in dance hall was constructed in 1931, as well as the current concrete bathhouse. The concret bathhouse was built in a distinct ar deco style. The pier and hall were torn down in 1938, but the bathhouse remained and has been used by the public ever since.