Uncle Fester, our Amorphophallus titanum, commonly known as titan arum or corpse flower, bloomed for the second time on August 18, 2021 and collapsed on August 23, 2021.

Titan arum blooms are unpredictable and very rare. As a spike emerges from the corm after the dormant phase, it is almost impossible to tell if the titan arum will leaf or flower. The characteristics of the inflorescence (group of flowers) and leaf bud are very similar. On August 2, 2021, the spadix emerged which confirmed that Uncle Fester would flower.

The titan arum (Amorphophallus titanum) also known as corpse flower, is native to rainforests on the island of Sumatra, Indonesia. It is classified as "endangered" on the International Union for Conservation of Nature’s (IUCN) Red List of threatened plants. Fewer than 1,000 plants remain in the wild.

Most years, it produces a leaf, reaching up to 15 feet, to absorb energy from the sun. Once the corm has enough energy to produce a flower bud and attempt to reproduce, a visual event will unfold.

An enormous flower spike – or spadix – will emerge, wrapped with a frilly, modified leaf called a spathe. The Amorphophallus titanum is one of the largest and rarest flowering structures in the world.

When the titan is ready to bloom, the spathe unfolds, exposing small flowers that bloom in rings around its base that release scent molecules to signal their readiness for fertilization. 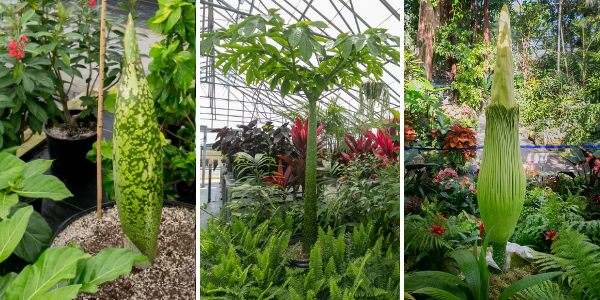 Know before you go

Why it's known as a corpse flower

When the titan arum blooms, it emits a powerful stench similar to rancid or rotten meat. The scent and the deep-red colour of the open spathe, attracts pollinator insects that feed on dead animals.

Stay updated on the titan arum