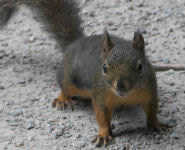 In Vancouver, "wildlife" is defined as all amphibians, reptiles, birds, and mammals, both native and not native to the province, excluding any domesticated animal under the control of a human. That includes a huge range of species, including:

What about ‘problem’ animals?

Some species are not protected by legislation. Some animals who are nuisances can be addressed humanely by using private pest control companies. These include:

Information icon The Parks Control By-Law applies to all wild and feral animals, including problem animals such as those listed above.

Learn more about urban wildlife control and how to report wildlife

Who looks after wildlife

BC wildlife is protected under the BC Wildlife Act, which is administered by the provincial Ministry of the Environment.

The Vancouver Park Board enforces by-laws related to wildlife feeding to protect animals and humans from negative interactions.

Get facts on Canada geese and population control, and what you can do about Canada geese.

In some Vancouver parks, notably Jericho Beach, there are populations of invasive European Rabbits.

The Pacific Great Blue Herons have returned to the colony at the Park Board office at 2099 Beach Avenue.