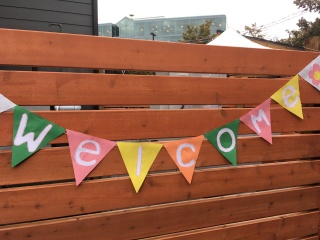 A food truck supplied grilled-cheese sandwiches and neighbours baked a large, homemade chocolate cake. A First Nations drum circle kicked off the event. The songs express an appreciation for life, sustenance, and healing.

One 19-year-old temporary modular housing tenant took a photo of herself with her new neighbours to send to her parents, who live in Northwest BC. Another tenant was there with his partner, who is expecting a baby. He expressed appreciation for the two meals they are receiving daily at the building.

A neighbour made the building’s new residents gift bags, including a handmade card, chocolate, dishcloths, and a framed photo she had taken. The nearby co-op residents painted a large card and filled it with welcome messages.

In the new temporary modular housing, tenants receive the right supports tailored to meet their individual needs so they can reconnect with their communities and rebuild their lives. 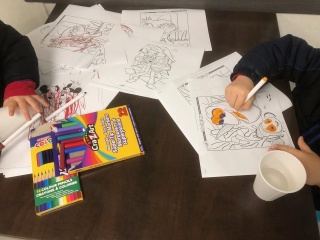 Sarah Ross House opened its doors to the community in November 2018. Neighbours gathered inside to meet the residents and enjoy some treats, including homemade bannock tacos. Children coloured at an art table prepped for the event.

Neighbouring families brought cookies and members of a nearby seniors’ society each donated a mug from their cupboard, collecting 100 mugs in total. One resident, who is deaf, put her doll artwork out on tables for neighbours to see.

Tenants at Sarah Ross House talked about how they came to live in the temporary modular housing. One man spoke about having Parkinson’s disease and how he needed housing after he could no longer work his job as a boat painter.

A woman mentioned she had a house, but lost her job and just couldn’t afford to pay for her home anymore. She stayed with friends and spent some nights on the street before moving into the Kaslo building.

Another woman said she couldn’t stop crying when she first moved into the modular housing this past summer because everyone was being so nice to her. She also appreciates that the building takes pets so she can keep her cat, “Champ.”

An 81-year-old senior said she previously spent most nights sitting at a bus stop on Kingsway, trying to stay safe.