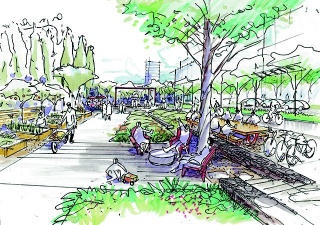 View sketches of each character zone

The Arbutus Greenway will be a defining element of Vancouver’s urban landscape as a vibrant and beautiful public space for walking, cycling, and streetcar.

The Arbutus Greenway is one of several walking and biking paths we're developing to encourage people to use active and sustainable modes of transportation.

The project, which started in 2016, currently has a temporary asphalt path and attracts thousands of people every day, providing people an opportunity to walk, bike, roll from False Creek to the Fraser River. In light of its success, in 2018, City Council endorsed enhancing the path to give people of all ages and abilities places to gather and rest and enjoy the surrounding landscape.

The Arbutus Greenway has become a popular and well-used walking, rolling and cycling path, and remains an important part of our city-building plans. While COVID-19 has led us to adjust spending on capital projects, it has also underscored how important walking and biking paths are to people's well-being.

Currently, we're focused on urgent needs along the Arbutus Greenway, such as making key safety improvements and continuing to improve network connections to the greenway, and coordinating with the new Arbutus SkyTrain Station and adjacent development. Staff will explore advancing detailed design work for some Character Zones in the next capital plan, which begins in 2023.