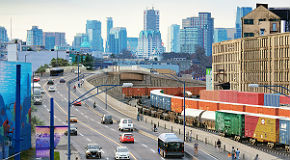 The Powell Street Overpass project is a $50-million major road and rail infrastructure enhancement for a section of Powell Street in Vancouver's Downtown Eastside, just west of Clark Drive.

The City contributed $3.75 million to the project, and was responsible for delivering the project on behalf of funding partners, which included Port Metro Vancouver, Transport Canada, CP, and TransLink.

July 28, 2014 — The Powell Street Overpass project is complete. Minor finishing work such as landscaping and trolley wire installation will be ongoing until fall 2014. We thank you for your patience during this project.

Final stages of construction, Powell Street should re-open in first week of August

June 17, 2014 – Crews have paved the first layer of asphalt on the western side of the overpass (see image below). In the coming weeks, weather permitting, we will finish paving, place sidewalks, install trolley poles and streetlights, and landscape.

March 1, 2014 – We have passed a major milestone on the project: installing the steel bridge girders over the Burrard Inlet Rail Line (see photo). Construction of the Powell Street Overpass Project is about 70% complete and Powell Street is on schedule to re-open to traffic in early August. 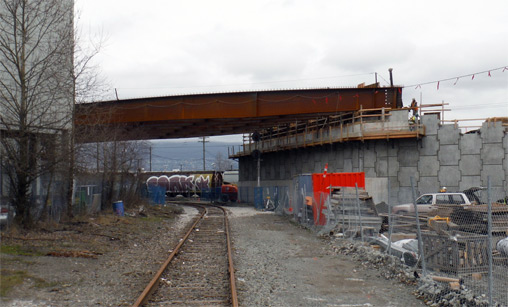 June 21, 2013 - Powell Street is closing between Hawks Avenue and Clark Drive for construction on June 24. Businesses will remain open, and local access maintained. We have worked with transportation consultants to reduce the impact of this closure, and are encouraging the use of alternate routes.

May 2, 2013 – The information we shared with the public during our May 2 open house is now available for you to review.

You can download the information board in the Documents tab.

April 15, 2013 – Come to the drop-in session and learn more about the project. City staff and project partners will be available to discuss the project, answer questions, and gather your input.

Council approves the project for construction

March 14, 2013 – Council authorized City staff to finalize agreements with partners. Upon completion, Council approved the project for construction on April 23, 2013.

February 2013 – We have started localized site preparation. We expect this work will have minimal traffic impacts. There will be limited and temporary lane closures scheduled during off-peak hours.

May 24, 2012 – We held an open house to give area residents and businesses the opportunity to review the plans for Powell Street, ask questions, and give us their opinions.

March 2012 – We began consulting residents, businesses, and community groups to get their opinions about this project. Stakeholders were invited to provide feedback in writing, by email, or by meeting in-person with City staff.

Read more about the feedback we received, in the Details tab.

What we heard at the open house:

Information about traffic during construction

What we are doing

We are replacing the Powell Street rail line level crossing near Raymur Street with a multi-use overpass. This new overpass will have four lanes of vehicle traffic, two pedestrian sidewalks, and a counter-flow bike lane.

We are also realigning a portion of Powell Street to the south so a new east-west rail track can be added. This track will increase capacity and improve access to and from the port.

Finally, we are creating dedicated cycling lanes and sidewalks to improve safety and connectivity to the planned Portside Greenway, which will run from downtown to Boundary Road as part of the City’s Greenways Network.

Why we started this project

We are creating the Powell Street overpass to:

We will provide safe, convenient, and comfortable walking and cycling routes for people of all ages and abilities. We will do this by:

We will improve transit and vehicle movement and safety in the Powell Street corridor. We will do this by:

We will improve rail operations to and from the port. We will do this by:

See the Economic Development Strategy for details of the City of Vancouver’s support for port, rail and trade gateway infrastructure.

City policies that guide this project

Supporting our port as a trade gateway

As part of the City's economic development strategy, we are committed to supporting our port as a trade gateway. We do this by protecting industrial and rail lands from development, so that the Port continues to thrive.

We are improving access to the Port for goods movement by rail and truck while addressing local community needs and impacts.

In order to reach our goal of becoming the greenest city in the world by 2020, it is important that we support the movement of goods by rail as much as possible.

Improving the safety and efficiency for cycling, walking, and public transit

We prioritize cycling, walking, and public transit as preferred modes of transportation, and are also committed to improving the safety and efficiency of pedestrian, cycling, transit, and vehicle movement both city-wide, and in the Powell Street corridor.

This project will contribute to these goals by providing dedicated cycling lanes and improved sidewalks. It will also remove the Burrard Inlet Rail Line road/rail level crossing for cyclists, pedestrians and buses, which will improve safety for all road users and reducing traffic delays.

Who we are working with

The City of Vancouver will contribute $3.75 million and is responsible for delivering the project on behalf of funding partners. Other partners include:

We began consulting and collecting feedback about the project from businesses, residents, and community groups in the spring of 2012.

We held a public open house on May 24, 2012 and stakeholders were also offered the opportunity to provide feedback in writing or by email, or to schedule an in-person meeting with City staff.

Feedback we have received from the public

Feedback we have received includes:

Staff continue to work with partner organizations to finalize project details, and will consider additional public input as the project moves forward.

Managing traffic in the area

City staff will monitor our traffic plan to make sure local streets and communities are not affected. We will make changes to the plan to address any issues, if required.

The City is also working closely with Translink and Coast Mountain Bus Company to maintain transit service levels in the area.

Localized site preparation is expected to have minimal traffic impacts with limited and temporary lane closures scheduled during off-peak hours.

Powell Street will be closed to traffic between Hawks Avenue and Clark Drive. Access will be limited to business and local traffic only.

Port Metro Vancouver (PMV) is Canada’s largest and busiest port, and the most diversified port in North America. It ranks first in North America in foreign export shipments and second on the west coast of the Americas in total cargo volume.

PMV is undertaking several initiatives to improve the movement of cargo, traffic and employees in and out of the port. It aims to increase rail capacity, reduce road-rail conflicts, and improve transportation access for area businesses.

The City has a key role in supporting the port as a gateway to global markets through local land use and transportation policies.

Transit service changes during this project

4 UBC/Downtown and 4 Powell/Downtown bus service is changing during construction. Get complete schedule and route details from TransLink.