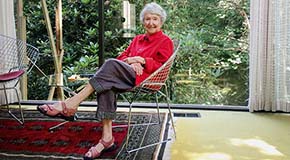 Cornelia Hahn Oberlander, a pioneer in landscape architecture and a beloved member of Vancouver’s Jewish community, was awarded the Freedom of the City on May 18, 2021, just days before she passed away on May 22, at the age of 99.

Oberlander escaped Nazi persecution in Germany at the age of 18.  She immigrated to the United States via England, and graduated among the first class of women from Harvard University with a degree in landscape architecture. She later settled in Vancouver and founded her own landscape architecture firm, bringing with her a vision of urban environments with pockets of nature that continues to shape our cityscape.

Bringing together rural and urban harmony

Oberlander also made her mark nationally and internationally. She designed landscapes for non-market housing and playgrounds across the country, helped draft national guidelines for the creation of play spaces in Canada, and worked on major projects like the National Gallery of Canada and the Canadian Chancery in Washington, DC.