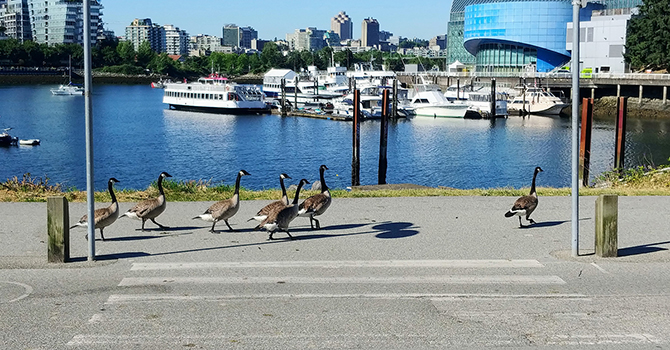 As springtime brings a burst of new life to the city, we're asking for your help in managing the population of one of Vancouver’s most prolific and problematic residents: the Canada goose.

While their striking colours, gaggle of fluffy goslings, and sometimes amusing (sometimes annoying) tendencies to wander slowly in front of traffic, Canada geese are often the subject of photographers’ and tourists’ attention.

But – owing to an ideal habitat and lack of natural predators – Vancouver’s Canada goose population is booming, causing widespread damage to parks and public enjoyment, including:

Where to find Canada geese

Several thousand Canada geese live in Vancouver and tend to congregate in areas where grassy clearings meet the shoreline, such as:

Though they gather in parks for feeding and moulting, they prefer to nest on spaces far above the ground – typically the roofs and balconies of private and public buildings and tall, topped trees. A single goose standing in the same spot day-on-day is a strong indicator that a nest may be nearby.

Help us locate nests to allow Park Board staff to addle eggs. Addling involves replacing viable eggs with eggs that have been pre-treated so that they will not hatch. This approach to limiting population growth is supported by the BC SPCA and People for the Ethical Treatment of Animals (PETA). Park Board staff have the necessary federal permits to perform this activity, as issued by Environment Canada under the Migratory Birds Convention Act External website, opens in new tab.

Why you shouldn't feed Canada geese

Another way we’re asking you to help control the population of Canada geese is by not feeding them. Not only is unnatural food bad for their health, but feeding causes geese to congregate in high-traffic areas and popular parks.

As Canada geese produce more excrement for their size and the amount that they eat than most species, that also presents a serious challenge to cleaning up after them. What’s more, wildlife feeding is prohibited across all Vancouver parks and beaches, and can incur a fine of up to $500.

Supplemental feeding by humans can also contribute to geese being able to lay more than one clutch of eight eggs per season; meaning that if one clutch does not hatch, they can replace it. In nature, without food from humans, this wouldn’t happen.