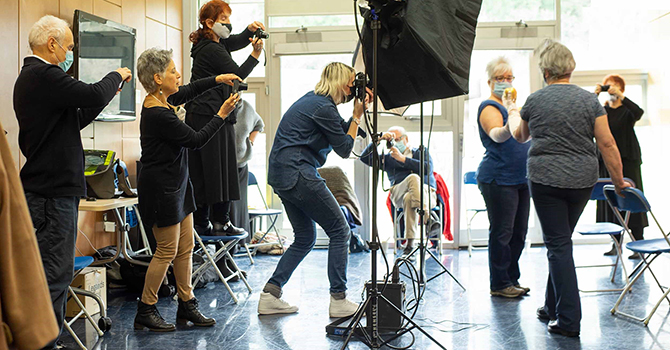 To be acknowledged, encouraged and pushed as an artist has been the greatest gift of participating in this project. It has been life-changing on a very deep level. I am profoundly grateful to have been a part of it.

Photographic artworks created by older adults premier today across Vancouver with the public launch of the Collective Agency Project.

The two-year project brought the seniors together to develop their interest in photography and art production with artists Christos Dikeakos and Birthe Piontek. Henri Robideau and Barrie Jones also provided artistic input and support.

The resulting artworks are being presented on digital street signs in downtown Vancouver, at an exhibition at the Pendulum Gallery, and in a collaborative panoramic installation at the Hillcrest Community Centre.

Piontek and fellow Lead Artist Christos Dikeakos are established photo-based artists living in Vancouver. Born in Germany, Piontek came to Canada in 2005 and is a faculty member Emily Carr University of Art and Design. Dikeakos has been photographing on the West Coast since the 1970s. Both have exhibited widely.

When and where to view the photos

A short film produced by Harry Killas that documents the participant’s personal journeys of discovery is also under development. The film will contribute to a growing body of evidence on the positive impacts of art and creative expression on the health of older adults.

The Collective Agency Project is coordinated by Ann Pollock and produced by the City of Vancouver Public Art Program to fulfill the public art requirement for OPAL by element. It was created in partnership with Arts & Health: Healthy Aging Through the Arts, Vancouver Board of Parks and Recreation. Special thanks to Barbara Cole, the Hillcrest Community Centre, Pendulum Gallery, and the Capture Photography Festival.

“What the project has meant for me personally is claiming the title of artist, of trusting my vision and my intuition, and finding the courage to follow them wherever they take me,” said Mickey McCaffrey, project participant. “To be acknowledged, encouraged, and pushed as an artist has been the greatest gift of participating in this project. It has been life-changing on a very deep level. I am profoundly grateful to have been a part of it.”

“Working on the Collective Agency Project has been an extremely gratifying experience, and it has provided meaning, connection, and belonging during times of isolation and disconnection,” said Birthe Piontek, Lead Artist. “Once more, the project has shown the value and importance of artistic expression – empowering, giving voice, and becoming the foundation for the discovery of self and other.”