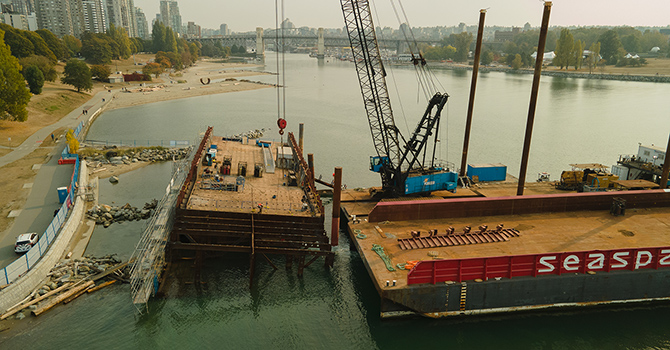 Last week, just over a year after it became stranded near Sunset Beach during an atmospheric river event, the English Bay barge was removed.

Throughout the 15-week deconstruction operation, Vancouver Pile Driving Ltd., the firm contracted by the barge owner’s representative, safely loaded debris from the site onto a secondary barge to be towed away for recycling or disposal.

Now that the barge has been removed, assessments have been completed to determine impacts to the shoreline, habitat, and environment. We are awaiting the final results of those assessments to determine any necessary actions.

While the seawall has remained open throughout the deconstruction process, the fencing and barriers around the work site have now been removed and the impacted area has fully reopened.

We thank the public for their patience during this operation, as well as the agencies and stakeholders involved in the response.

On November 15, 2021, during an atmospheric weather event, a barge weighing 3.5 million pounds drifted loose from its anchor and ran aground adjacent to the seawall at Sunset Beach. Since then, it has become the subject of memes, artwork, and even holiday decorations as its frame dominated the shoreline.

The barge was deemed to be a total constructive loss, and despite an attempt to refloat it, the barge could not be towed away. As such, it was determined that the barge would be deconstructed on-site in sections by the contractor appointed by the barge owner’s representative, Vancouver Pile Driving Ltd. (VanPile).