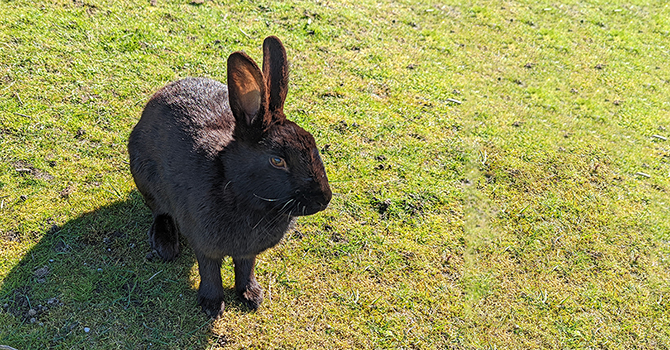 We get it. Jericho’s bunnies are cute – but please don’t touch

As Easter fast approaches, we're appealing to the public not to release, feed, or touch the local fluffballs for their sake – and yours.

Feral rabbits populate the grassy areas around Jericho Beach. Drawn by their fluffy tails, twitching noses, and relative tameness, people often try to handle and feed them. But these interactions poise serious health threats to both the animals and public, and have negative knock on effects to the environment.

Jericho Beach’s feral rabbit population is an invasive species colony, originating from domestic pets that have either been purposefully released into the wild, or escaped.

Easter bunnies, bought as a gift, are sadly often abandoned in parkland once the novelty has worn off and the responsibility of pet ownership sets in. Not only does this contribute to the negative impacts of feral rabbits in the park but it leaves domestic animals frightened, malnourished and vulnerable to a huge range of harmful consequences including traffic accidents, predators, and disease.

Touching or trying to pick up wild animals is distressing for them, and can put people at risk of being bitten or scratched. More seriously, rabbits carry pests and parasites such as ticks, which can transmit deadly diseases to humans and dogs such as Lyme Disease.

Wildlife feeding is prohibited across all Vancouver parks and beaches, and can incur a fine of up to $500. Not only is feeding feral rabbits unhealthy for them, when they gather around feeding areas, they become more vulnerable to predators and spreading disease. Food left out for rabbits attracts mice and rats which can lead to infestations and further opportunities for spreading diseases like Hantavirus.

The best thing you can do for any wild animal is give it space, and observe from afar. If you have a dog, keep it under control, on leash, and away from wildlife.

As education and signage rolls out to remind the public how to peacefully co-exist, the we'll continue to work closely with wildlife experts, the BC SPCA and the Invasive Species Council of BC, on long-term research and monitoring of rabbit populations and their impact on Vancouver park ecosystems.

Coexisting and protecting Vancouver’s wildlife relies on all of us doing our part to ensure both animals and people can enjoy our greenspaces without negatively interacting with one another.

Any incidents of wildlife feeding should be reported immediately by phoning 3-1-1.