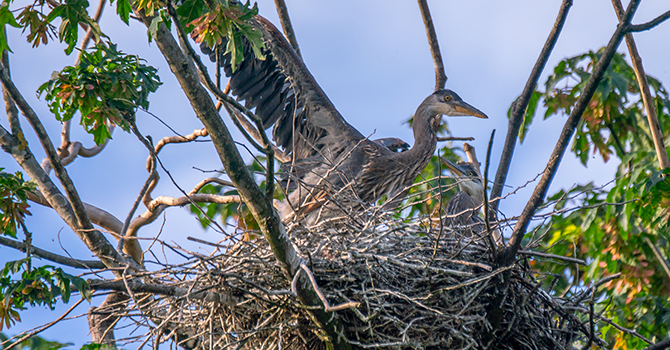 High in the treetops of Stanley Park, the sound of “tik, tik tik” echoes through the branches as Vancouver’s resident Pacific Blue Heron colony welcomes its first chicks of the year.

Thirteen newly hatched chicks have been identified through Stanley Park Ecology Society’s latest survey on the colony, located in the trees bordering Park Lane and the Stanley Park tennis courts.

Currently, the team can only count the new arrivals during the rare moments the herons take a break from incubating, but with an estimated 40 eggs in the nests, more chicks are anticipated to arrive over the coming weeks.

This has been a difficult year for the colony with nesting season beginning later than expected—most likely due to the extreme winter weather—and reported eagle raids occurring throughout spring.

Despite these challenges, several eggs have survived and viewers have been treated to the sight of the chicks’ spiky grey mohawks and swaying necks poking from the top of the nests in the last few days.

Now in its seventh year, the Heron Cam provides the ultimate close-up view of this remarkable species as they go about their daily rituals, including courtship and mating, nest building, egg-laying, and of course, hatching!

Viewers can access a birds-eye view of the 40 nests, and even take control of the camera by zooming in on multiple nests, using different angles.

How to behave around herons

To ensure herons are given the space to nest and raise their young peacefully, visitors should:

If you find a fallen chick, it may or may not need attention; young herons on the ground near a heronry is normal. If a chick is obviously injured, notify the Wildlife Rescue Association (10am to 4pm) at 604-526-7275 or the Burrard Animal Hospital and Emergency (after hours) at 604-738-5683.

Pacific Great Blue Herons were first documented in Stanley Park in 1921. Since that time, the colony has changed nesting locations several times before settling in its current location in 2001. It is one of North America’s largest urban heron colonies.

The first sight of these fuzzy grey chicks is a welcome one for local conservationists as Pacific Great Blue Herons are classified as a 'species at risk' in British Columbia. The population of these herons has declined steadily since the 1980s as a result of nesting failure, eagle attacks, human disturbance and habitat loss. In Canada, there are around 4-5,000 nesting adults, with the majority living around the Salish Sea. Pacific Great Blue Herons are also unique in that they do not migrate as most great blue herons do.

Working in conjunction with the Vancouver Board of Parks and Recreation and the Canadian Wildlife Service, the Stanley Park Ecology Society has been supporting herons in this urban environment and monitoring the heronry in Stanley Park since 2004.