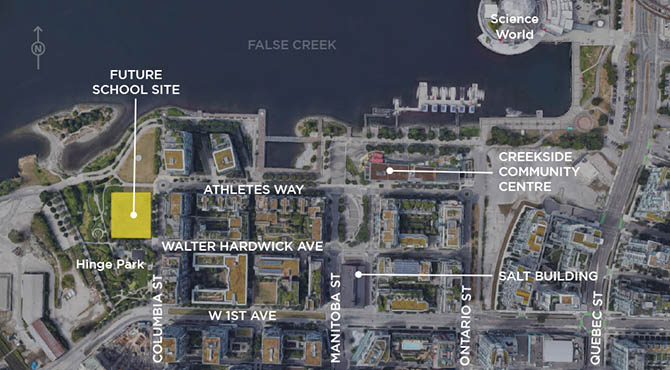 Schools and the children who attend them are the heart of any community, and this new public elementary school site will soon become the heart of the Olympic Village.

Vancouver City Council and the Vancouver School Board (VSB) have approved entering into a 99-year ground lease for a site that would see a future elementary school and childcare facilities constructed in the Olympic Village neighbourhood.

The public school site was identified in the City’s Southeast False Creek Official Development Plan PDF file (3 MB) adopted by City Council in April 2007. The site is located at the southeast end of False Creek, just west of Columbia Street and adjacent to Hinge Park.

The VSB is applying to the Ministry of Education for capital funding for construction of the school. Under the proposed terms of the lease agreement with the City, funding must be obtained and construction must start no later than January 31, 2024.

The City and the VSB will work together over the coming months to finalize the lease agreement. Under the proposed agreement, the VSB would sublease a childcare centre back to the City for a 99-year term. Future City Council approval will be required for funding and for the authority to enter into a development management agreement for the site.

The City and the VSB signed a Childcare Facility Funding Agreement in June 2013 to help move forward the creation of school-aged care spaces within schools. This partnership identified the value of creating early care and learning spaces that are integrated, designed, and purpose-built with joint uses in mind.

“Building schools in Vancouver’s growing communities is important so that children can attend school in their own neighbourhoods,” says Vancouver School Board Chair Carmen Cho. “The Southeast False Creek/Olympic Village community, which has and continues to experience significant population growth, now has a site available and we appreciate the collaborations with the City of Vancouver.”

“Schools and the children who attend them are the heart of any community, and this new public elementary school site will soon become the heart of the Olympic Village,” said Mayor Kennedy Stewart. “On top of providing much-needed space for learning, we also have the opportunity to add childcare that will help support parents and make this community even more family friendly. My thanks to City Council for agreeing to this long-term lease.”