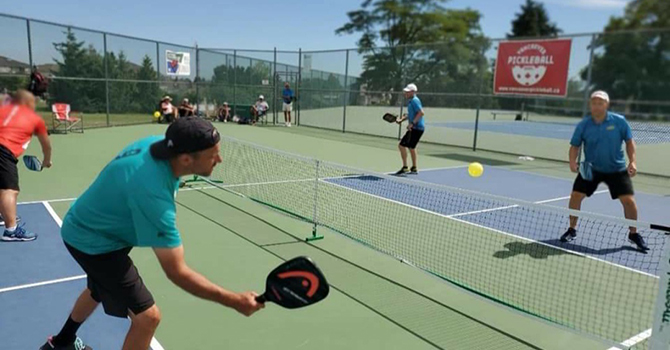 With increasingly more people playing pickleball, the Park Board has been working with stakeholders to build 20 courts, including eight courts dedicated to the sport in Queen Elizabeth Park.

The Vancouver Park Board has opened the first ever dedicated pickleball courts in Vancouver.

Mona Lee, President of the Vancouver Pickleball Association, is thrilled with the permanent courts in Queen Elizabeth Park.

“We celebrated the grand opening of Vancouver’s first dedicated pickleball courts at Queen Elizabeth Park with pickleball pro Steve Deakin. The Vancouver Pickleball Association is using temporary nets provided by the Park Board until semi-permanent ones are installed. It seems busier every week with new players arriving every day. Families are now able to come out together, with parents and children all playing. Pickleball is definitely a game for everyone. It’s horribly addictive,” she said.

Mona said pickleball is North America’s fastest growing sport. “A sport for all ages and skill levels, it’s a combination of tennis, badminton and ping pong. It’s easy for beginners to learn and for experienced players, it can be a highly competitive, quick and strategic game. And above all it’s fun! “

Once construction is completed at Cedar Cottage and Brewers parks, there will be a total of 25 outdoor pickleball courts in Vancouver, in addition to indoor courts at community centres.