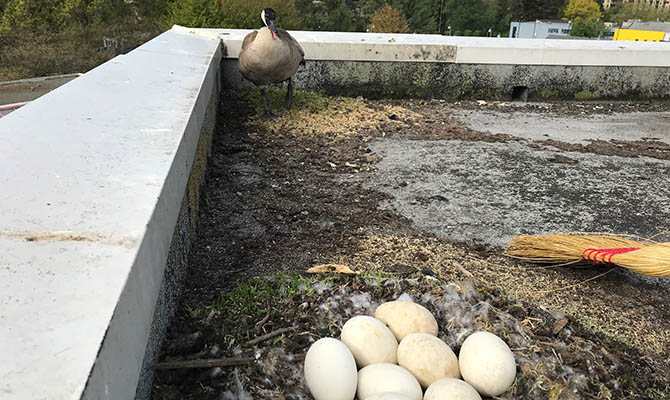 Feeding by humans occurs regularly and contributes to the geese congregating in high-traffic areas and popular parks near this food source.

The Vancouver Board of Parks and Recreation is taking action to reduce the numbers of Canada geese populating city parks, beaches, and the seawall.

Staff are developing a Canada Geese Management Plan to:

To help us locate and remove nests or addle eggs, you can:

Wildlife specialists indicate that at least triple the amount of addling needs to be done in order to affect the population size and growth rate.

“Supplemental feeding by humans can also contribute to geese being able to lay more than one clutch of eight eggs per season; meaning that if one clutch does not hatch, they can replace it. In nature, without food from humans, this wouldn’t happen.”

It is estimated that there are more than 3,500 Canada geese in Vancouver with the population growing each year as they have no natural predators and ideal habitat.

Geese can be found across the city, but tend to congregate in areas where grassy clearings meet the shoreline such as Stanley Park, English Bay and Sunset Beach, Trout Lake, along False Creek, as well as VanDusen Botanical Garden.

Geese congregate in parks for feeding and moulting, but do not necessarily nest there. There is evidence they nest on the roofs and balconies of private and public buildings and tall, topped trees throughout the city.

Unfortunately, Canada geese are having a negative impact on park habitats and public enjoyment, including:

Susan Lipsett, who lives next to Granville Island, has counted as many as 175 geese, including the goslings, during the summer months.

“The geese are benign most of the time, but when they have goslings they are vicious. I know two people who were bitten and of at least three dogs that got giardia from eating goose poop,” she said.

Canada geese have inefficient digestive systems and produce more excrement for their size and the amount they eat than most other species. Wedding venues in parks and gardens struggle with keeping the areas clean of goose droppings, as do water parks.

It is a constant challenge for Trades and Operations staff who are looking into buying equipment that can be used to remove droppings.

Egg addling supported by BC SPCA and PETA

Since the early 1990s, egg addling has been the Park Board’s primary means of population control and is the only known ongoing control effort in the city. However, the challenge for staff is locating and accessing Canada geese nests.

This approach to limiting population growth is supported by the BC SPCA and People for the Ethical Treatment of Animals (PETA).

Park Board wildlife specialist have the necessary federal permits to perform this activity, as issued by Environment Canada Under the Migratory Birds Convention Act External website, opens in new tab.