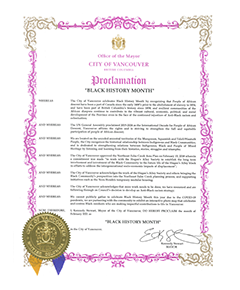 Join us in marking Black History Month 2022. Black History Month provides us with the opportunity to celebrate and learn about the many achievements, investments, and contributions of Vancouver’s Black and African diasporic communities, even while these communities have endured historical and continuing inequality, oppression, and erasure.

This Black History Month, we are:

It is not enough to just celebrate Black History Month and highlight past and present leaders in the Black and African Diaspora community. Each and every day we should be honouring, uplifting, and respecting the voices and lives of all members of the Black community.

For too long, the institution of the City of Vancouver and its elected leaders have perpetuated discrimination against Black and African diaspora communities. The City of Vancouver is committed to addressing anti-Black racism in all its forms, including systemic racism. Staff are prioritizing this work and are focused on addressing the recommendations made by the community. Find out more about the steps we have taken in advancing reconciliation, anti-racism, and equity actions.

Vancouver’s Black leaders no longer with us

We are highlighting and honouring members of the local Black Canadian community who are no longer with us.

On February 4, we recognize the 100th anniversary of the passing of prominent community leader, lifeguard, and swim teacher, Joe Fortes.

We also mark the recent passing of former professional basketball player with the Harlem Globetrotters, and leader of youth basketball development programs in Vancouver.

BC has a rich Black history dating back to Canada’s colonial origins. In 1858, nearly 800 free Black people left the oppressive racial conditions of San Francisco for a new life on Vancouver Island. These pioneers enriched the socio-economic life in their community, overcoming intense discrimination and adversity. From the 1920s to the 1960s, Vancouver’s Black Community clustered in the East End, with its nucleus at a site known as Hogan’s Alley, and became a thriving Black community and cultural hub.

In 1967, the decision to expand the highway system through Vancouver resulted in the expropriation of land and buildings in this area to make way for the construction of the Georgia and Dunsmuir Viaducts, resulting in the loss of homes and businesses. The Black Community was uprooted from this area and an identifiable Black neighbourhood has not re-emerged in Vancouver.

Black History Month was recognized by the Government of Canada in the House of Commons in 1995. The motion was introduced by the Honourable Jean Augustine, the first Black Canadian woman elected to parliament. Vancouver City Council passed a motion in 2011, designating Black History Month one of its official celebrations. Every February, we celebrate the history, contributions, and culture of Black Canadians.

Work we are doing with the community

We honor 10 Black BC residents and organizations shaping our communities through activism.