Symbols of the City of Vancouver

Vancouver is a vibrant and green city. Many of the City's symbols represent our plant life, waterways, wildlife, and mountains.

The City of Vancouver needs to authorize any use of its emblem and logo or other City symbols. Send a request for permission and for approved artwork to media@vancouver.ca.

Vancouver's emblem, introduced in 2006, conveys the idea of a vibrant, livable, healthy and natural city. The palette captures the predominant colours of our natural environment: blue for the sea and sky that surround our city; and green for the grass, trees and our abundant plant life.

The two overlapping elements in the graphic allude to many symbols of Vancouver: budding blossoms; crests of ocean waves and the peaks of mountains; birds in flight; the sails of Canada Place, a prominent city landmark; and the letter V. The placement of the graphic element against the words "City of Vancouver" suggest a spark or fireworks–a city that is alive and growing. 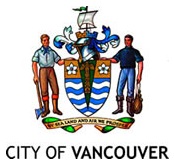 Vancouver's coat of arms is reserved for formal, ceremonial purposes. It was granted by the College of Heralds, London, England on March 31, 1969. The coat of arms represents many significant elements of the City's heritage.

The shield, with ship's sail and crown, depicts Vancouver's location and status as a seaport. The Kwakiutl totem pole represents First Nations in Vancouver; the logger and fisherman point to the City's original industries; and the dogwood flowers are symbols of British Columbia. The wording "By sea land and air we prosper" reflects the three methods of transportation by which the city has prospered.

Vancouver's present-day coat of arms is the third version the City has used.

The City of Vancouver flag was approved by City Council on May 17, 1983. It was designed by Robert Watt, former Director of the Vancouver Museum.

The side chevron of green represents the land on which the City is built and the forest from which much of its property has come. The alternating waving bars of blue and white symbolize the sea, which is the other principal foundation of the City's growth. The gold shield represents Vancouver's status as a corporation. On the shield is the City Badge, a specific mark of civic government.

The Lord Mayor and Corporation of the City of London, England presented the mace to Vancouver in 1936 as a gift on its 50th birthday. Made from Canadian silver and mercurial gilded, it is 1.5 metre (5 feet, 3 inches) long and weighs 18 kg (40 lb). It is an exact replica of the City of London's own mace, except for the stem (the London mace stem is wood).

The mace is symbolic of City Council's authority and is displayed in the Council Chamber during regular Council meetings.

Although there are records going back as far as 1917 that discuss the question of an official flower for the City (other contenders back then were the dogwood, the dahlia, and the sweet pea) the rose became the City's official flower on December 14, 1967. 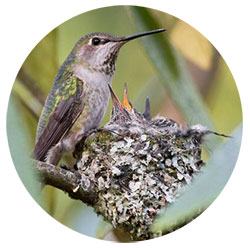 City of Vancouver residents voted to select the official City Bird between April 28 and May 14, 2017. The City Bird symbolizes the importance of birds in our ecoystem.