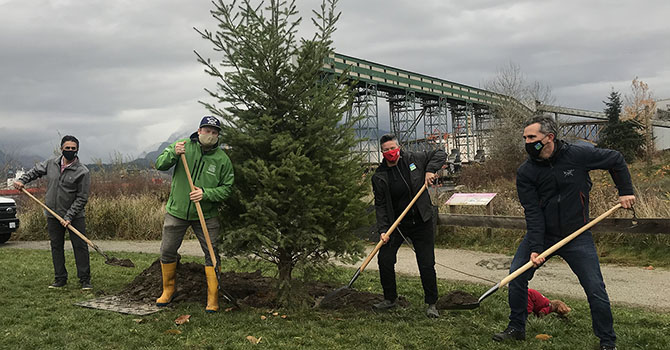 The urban forest provides many social, ecological and economic benefits to the city and its residents. In light of this, the Park Board has planted 150,000 trees in parks, streets, and supported private property plantings in the past decade—achieving one of the City of Vancouver’s Greenest City Action Plan targets. Last month, a grove of 11 Douglas firs was planted in New Brighton Park during a small ceremony to mark the milestone.

At a meeting last night, the Board directed staff to adopt a new city-wide goal of 30% urban forest canopy cover by 2050 PDF file (337 KB). The planting of 150,000 trees, which includes those planted by residents who bought trees at our tree sales over the past five years, is an important first step.

“This new goal will require efforts beyond planting trees in parks. It will require ongoing stewardship of our existing trees to ensure robust and healthy canopy growth, continuing advocacy and expansion of the urban forest in low canopy areas, as well as ongoing collaboration with City Engineering and Planning departments,” said Vancouver Park Board Chair Camil Dumont.

How we'll meet this goal

In order to meet the new goal, the Park Board, which is responsible for the planting and care of all trees in city parks and streets, aims to innovate in the following areas:

The 2050 goal reflects the Park Board and City’s commitment to increasing urban livability, restoring ecological function, and mitigating the impacts of climate change. Vancouver’s urban forest canopy, which refers to leaves, branches, and stems covering the ground as viewed from above, is currently at 23% (2,645 hectares out of the city’s total area of 11,500 hectares).

VanPlay, the Park Board’s Master Plan, recognizes the need to increase tree canopy cover within Vancouver and the importance of considering equity in tree planting efforts going forward. In addition, the Park Board’s Urban Forest Strategy outlines plans to restore forests across 25 hectares of natural areas and to double the number of street trees in priority neighbourhoods such as the Downtown Eastside, Marpole, and False Creek Flats.

With climate change as one of the biggest current global challenges, many municipalities are establishing ambitious urban forest canopy cover targets in an effort to mitigate climate impacts and reduce carbon pollution. Improving our forest canopy will directly support the City’s Climate Emergency Action Plan, as well as the Climate Change Adaptation Strategy.