The West End lies west of Downtown, and, on three sides, is bounded by water: English Bay, Coal Harbour, and Lost Lagoon in world-famous Stanley Park. Recreational amenities are within walking distance for residents of this high-density area. The West End includes Davie Village – traditionally a hub for the city's gay community – and Denman Street, which together provide local shopping and restaurants. This area also has high-end retail on Robson Street and Alberni Street.

This area has a community plan completed in late 2013.

The West End is located in the most densely populated, intensively active portion of the Lower Mainland. It shares the peninsula with the Downtown, Central Business District and Stanley Park. Until the turn of the century, the West End was only sparsely settled, due to its distance from the old Granville Townsite (Gastown).

Initiatives in the West End

We created the West End Community Plan to ensure that future growth in the West End meets the needs of the community. Learn more about the plan.

The Comox-Helmcken Greenway provides an important east-west connection through Downtown from False Creek to Stanley Park.

A Community Plan is the result of a comprehensive, collaborative local planning process. 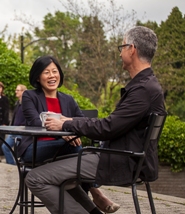