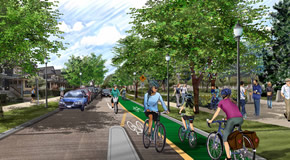 The Comox-Helmcken Greenway is an important east-west connection through Downtown from False Creek to Stanley Park for pedestrians and cyclists of all ages and abilities.

The greenway is being developed in two sections with Section 1 of the greenway now complete. Section 2 will take additional time to design due to the complexity of the project.

Benefits of this project

Development of section 2 from Hornby St to the False Creek Seawall is a medium-term priority. It will take additional time to propose a design for this route due to the complexity of the project. The rescheduled project timeline will allow us more time for additional listening and learning through extensive consultation with external partners and stakeholders.

May 4, 2016 - We commissioned a study by the UBC Health and Community Design Lab and partnered with the centre for Hip Health and Mobility on another study entitled, "Active Streets, Active People". Both studies examined the effects of improved access to walking, cycling and opportunities for social connection along the completed greenway. Results included:

Read the news release and the two research reports for more details.

Once the full Comox-Helmcken Study research findings have been published the full report will be available on our website.

Maps and details of the Section 1 design

The City’s Transportation 2040 Plan envisions an efficient transportation system to support a thriving economy, a healthy, safe, accessible and vibrant city, and an improved natural environment.  Specific targets include having two-thirds of all trips in Vancouver by sustainable modes by 2040 and eliminating traffic-related fatalities.

The 2002 Downtown Transportation Plan included recommendations approved by Council to guide development of the Greenway along the preferred route alignment of Comox and Helmcken streets. This was a result of feedback from the community about the quiet, well treed residential character of Comox Street with its important connections to historic Mole Hill and Nelson Park and Yaletown, Seaside Greenway and False Creek Ferries.

The Greenway is being developed in two sections:

Maps with further design details for Section 1 are available in the Documents tab. 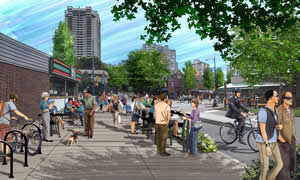 The Comox-Helmcken Greenway is part of the City Greenway network, connecting Stanley Park to False Creek. The Greenway route was approved by Council as part of the 2002 Downtown Transportation Plan.

In the fall of 2011, City staff consulted with businesses, seniors, children, youth and others and took into consideration their feedback in the proposed Greenway through open houses, walking tours (guided and self guided), workshops with youth and seniors, a survey, and community and stakeholder meetings. We wanted feedback from people of all ages in order to develop a successful greenway project that would serve the needs of the community and the city as a whole.

In total, 619 people participated in the consultation process:

What we heard during public consultations

The following information was collected at the open houses, workshops, meetings, walking tours and the online survey.

When asked to imagine using the Comox-Helmcken Greenway people ranked the following as their biggest potential concerns:

When asked to imagine using the Comox-Helmcken Greenway to promote an active lifestyle people ranked the following features as contributing to this vision:

Obstacles for those travelling along the Comox-Helmcken Greenway

Learn more about the Transportation 2040 plan

View a detailed map of the Greenway