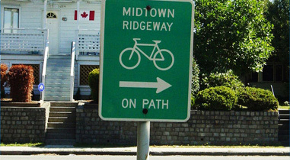 The Ridgeway Greenway is almost complete and extends approximately 13 km right across the City from Pacific Spirit Park to the City of Burnaby's Central Park.

This cross-town route starts on 8th Avenue at Blanca Street. It passes through the leafy residential neighbourhoods of West Point Grey, Dunbar, and Kerrisdale to 37th Avenue. The Ridgeway Greenway continues east on 37th from Granville Street to Nanaimo, then along 45th Avenue and ends at the Vancouver/Burnaby border at Central Park.

Except for a mixed-use path in Jones Park, pedestrians use the sidewalk and cyclists share the road with vehicles along traffic-calmed streets.

Some of the Ridgeway Greenway’s major destinations include:

In February and March 2012, City staff met with stakeholder groups like the Killarney Community Centre Group to discuss the temporary traffic calming measures introduced in 2010 along the Ridgeway Greenway.

Staff learned that the traffic diverters have negatively affected the broader community and adjacent bikeway and are recommending:

In 2009, staff were directed to review and implement “measures to enhance the comfort and effectiveness of existing and planned bikeways and greenways by installing traffic calming measures including diversionary measures.”

In 2010, temporary diversionary measures were introduced at several locations on local street bikeways throughout the city with the purpose of reducing vehicle volumes and speeds on the bikeways and greenways.

The traffic diverters that were installed on East 45th Avenue at Clarendon/Elliot Street and Rupert Street did reduce vehicle volumes on East 45th Avenue, but increased volumes at the front doors of Waverley and Weir Elementary Schools, on adjacent lanes and streets, and on the Sunrise Bikeway.

Furthermore, vehicle violations significantly increased at the intersections of Clarendon/Elliot Street and Rupert Street as a result of the diverters.