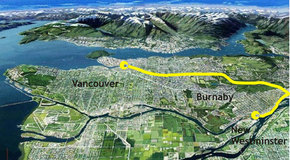 The Central Valley Greenway (CVG) is a 25 km regional greenway linking Vancouver, Burnaby, and New Westminster. It is a combination of off-road paths and on-street routes.

The CVG follows the Expo and Millennium SkyTrain lines, running from False Creek through Burnaby, and along a shallow valley south to the Fraser River in New Westminster.

There are also dozens of parks, community centres, swimming pools, and libraries along the route.

The Central Valley Greenway also links to the Millennium and Expo SkyTrain stations.

What's happeningUpgrades to the greenway

These upgrades were installed using interim materials in December 2021/January 2022. In summer 2022, our crews are scheduled to deploy street paint to accompany the interim upgrades.

We welcomed comments on the upgrades during a period of public consultation from September 28 to October 18, 2021. Additional comments were received after this period and after implementation which influenced the interim design.

We will continue to monitor the effectiveness of these interim upgrades at improving safety and comfort for people cycling during 2022.

If you have any questions or comments related to these upgrades, email greenways@vancouver.ca or tell us online.

The Central Valley Greenway is one of the 14 greenways identified in the Vancouver Greenways Plan PDF file (7.5 MB), and is an integral part of the Greater Vancouver Regional Greenway Vision. Construction of the greenway took place over two phases and was completed in 2009.

On February 24, 2004, City Council approved $4.63 million for the Federal Government’s Urban Transportation Showcase Program, which included the design of the CVG.

The community plan sets out a thoughtfully-managed framework for future change.