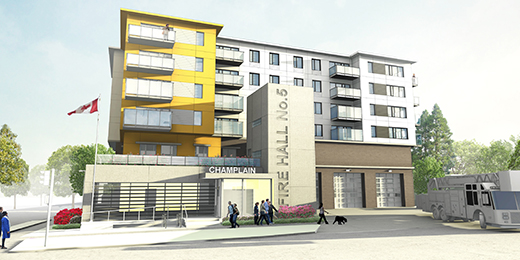 The City proposes to replace the aging Fire Hall No. 5 in Champlain Heights with a new, larger fire hall that has affordable housing.

Built in 1952, the current building no longer meets the needs of Vancouver Fire Rescue Services.

The proposed six-floor building would have a fire hall on the first two levels, housing units on the top four, and a rooftop patio. YWCA Metro Vancouver will provide the housing for low-income, woman-led families and their children.

Because housing is part of the proposed building, we need to rezone the property first.

November 28, 2016 - This morning we broke ground on the innovative Fire Hall No. 5 and YWCA Pacific Spirit Terrace, which will provide 31 new homes for single mothers and their children.

We partnered with Vancouver Fire and Rescue Services and YWCA Metro Vancouver for a forward-thinking collaboration to create new affordable homes with below market rate rents for women and their family.

July 25, 2016 - Proposals from contractors were reviewed and four were invited to provide bids for the redevelopment of 3090 E 54th Avenue.The successful bidder was Mierau Constructors Ltd. Construction should start mid-August 2016.

Deconstruction of Fire Hall No. 5 to begin

April 1, 2016 – A contract for the deconstruction of the existing fire hall has been awarded to D. Litchfield & Co. The first part of the work will be to carefully remove all asbestos. Then the contractor will remove items to salvage followed by the removal of the rest of the building. The deconstruction is expected to divert more than 90% of the building from the landfill. Once complete the site will remain fenced until the construction starts in July 2016.

March 4, 2015 – Our facility design team has submitted a rezoning and development application for Fire Hall No. 5 and its housing units. As part of the application, our Planning Department invites you to an April 1 open house to see and discuss the model and drawings for the proposed replacement fire hall and housing.

September 23, 2014 – Parkwood Construction has been selected by the City to construct the temporary Fire Hall No. 5 at 3090 Rosemont. Construction will be completed by early 2015.

Find out what we heard in the questionnaire

Tell us what you think about the proposed design

June 25, 2014 – If you were unable to make it to the open house on June 25, you can still tell us what you think about this proposed design.

Review the open house materials, and then take our brief online questionnaire.

June 25 open house on the proposed design for the fire hall and safe, affordable housing

June 13, 2014 – The Fire Hall No. 5 project is now in the pre-application phase of the rezoning process. Before submitting the rezoning application for the site, the City is holding an open house to share the proposed design for the new building which would provide safe, affordable housing for low-income, woman-led families and their children above the new fire hall.

Drop by the open house to learn more about the proposed building design and share your views.

Representatives from the City of Vancouver, Vancouver Fire and Rescue Services, and  YWCA Metro Vancouver, will also be present to discuss the project.

If you can’t make the open house, an online questionnaire will be available here starting June 25.

New fire hall to include 31 units of non-market housing

December 18, 2013 – Council appointed YWCA Metro Vancouver as a potential lease holder for 31 units of non-market rental housing as part of the new Fire Hall No. 5 building. Low-income, woman-led families and their children would live in the units once they are completed.

Using civic land and facilities to encourage partnerships in non-market housing is a Council priority and part of the larger Housing and Homelessness Strategy 2012-2021.

Council approved an increase of up to $9 million in the project budget to include the non-market housing. The YWCA and government partners will contribute $3.5 million and the City will provide $5.5 million from the 2014 Capital Budget.

June 20, 2013 – The project has been on hold as we consider adding affordable rental housing above the firehall. This would align the project with our Housing and Homelessness Strategy. Interested non-profit societies who would be interested in operating this housing - which would be built above the fire hall with no internal connection - are invited to submit an RFP (request for proposal).

This change in direction will put the project back about one year, so the temporary fire hall will not be installed until spring or summer 2014. A public meeting is being planned for the fall to preview design ideas and get public feedback, prior to submitting a rezoning application.

February 8, 2013 – At their January 28 meeting, the Park Board unanimously approved the temporary use of a portion of the northeast corner of the perimeter land around the Fraserview Golf Course as the location for the temporary Fire Hall No.5. This location will be in use starting in late April 2013 for approximately 18 months.

January 23, 2013 – The request to use a portion of the perimeter lands of the Fraserview Golf Course (northeast corner) as the temporary fire hall location (shown as “Option C” in the open house materials) will be presented to the Park Board at their meeting on Monday, January 28. This option was supported by 72 per cent of responses received at the open house and through the web survey and other public input.

Thanks for your input

December 18, 2012 – Thank you to everyone who filled in the survey and attended the open house.The feedback we gathered has been summarized into a report which will be considered by the Park Board in early 2013. The location for the temporary fire hall will be confirmed after the Park Board meeting.

October 23, 2012 – Thanks to everyone who joined us at our open house on October 20. The display boards that detail the possible locations for the temporary fire hall are now online. If you haven't already let us know which location you'd prefer, fill in the online survey.

October 20, 2012 – Join us at an open house to help decide on the temporary location for Fire Hall No. 5. This is a chance to speak with City staff and the architectural team, ask questions, and offer your feedback on the location you think would work best for the community.

Tell us your ideas for the fire hall's temporary location

October 19, 2012 – Let us know where you think the temporary fire hall should go, by filling in our online survey.

Why we're replacing the fire hall

Fire Hall No. 5, located at East 54th Avenue and Kerr Street, is scheduled to be replaced. It was built in 1952.

The main reasons are:

The new fire hall will have:

The proposal is for a six-storey building that will contain:

We would like to include non-market family housing with the fire hall because it is:

The concern with noise is often brought up, but the Fire Department is very conscious of being a good neighbour and it will not be any noisier than living near a fire hall. The noise from the activities of the fire department should not be any more intrusive to the tenants than what is heard by the neighbouring properties. An acoustic engineer will assist the design team to control the noise and make sure the design meets or exceeds current standards.

The temporary fire hall will be located at the northeast corner of Fraserview Golf Course, at Rosemont Drive and Kerr Street, to continue providing service during the construction period.

There will be little change to the park during this time, and so you should be able to continue using it. Once the replacement fire hall is complete, the building will be immediately removed, and the park returned to its current state.

Although the temporary fire hall will be located on park land, no trees in the park will be removed for this project.

How Fire Hall No. 5 serves the community