Documentary: Seeds of the Inner City 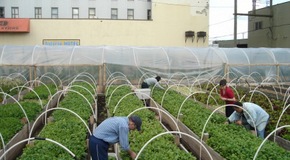 Highlighting the Efforts of SOLEfood Farm

The purpose of the Pioneering Urban Food Production in the Downtown Eastside (DTES) project was to produce a documentary film about the SOLEfood Farm, the first urban farm in Vancouver run by inner city residents.

The film showcasesVancouveras a pioneer in urban food production systems and highlights the importance of social enterprise as a motor of change and revitalization for the DTES and its inhabitants.

The documentary, entitled Seeds of the Inner City, was directed by Colombian-Canadian filmmaker, Andrés Salas, and documents the construction and development of the SOLEfood farm.

The documentary explores the potential of community economic development and the complexity of human relationships. Seeds of the Inner City will be used as an educational and promotional tool that will:

Both a short and long version of the film are available for viewing.

The short version of the film was included in:

The long version of the film has been submitted for inclusion in:

In addition, it will be presented twice as a free screening at VLAFF 10 in September 2012.

The VLAFF provides a forum for the promotion and exhibition of Latin American cinema. Since 2003, this annual festival has been promoting dialogue between cultures and explores historical and social issues through the eyes of filmmakers.