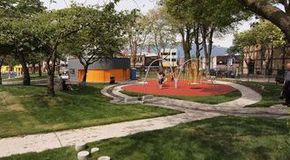 The Vancouver Park Board and the Oppenheimer Park Commemorative Task Force are working together to develop commemorative projects in the park that:

Goal of the projects

The goal of the Park Board and the Task Force is to complete projects that reflect each of the following themes, which were identified after significant community consultation:

After consulting with Kat Norris, a Downtown Eastside and Indigenous advocate from the Lyackson, Coast Salish First Nations on ceremonial protocol, the First Nations' sub-committee hosted a traditional ceremonial planting of a Western Red Cedar in the park on 12 April 2011. The ceremony was conducted by Robert Nahanee, a respected Coast Salish Cultural Advisor of the Squamish Nation, with the support and celebration of the community.

Carving traditions are established social and cultural legacies of the Coastal First Nations. They are also the contemporary arts practice of highly respected First Nations' carvers. An important community celebration marked the installation of two new carvings in the park on 16 February 2012. The Oppenheimer Park Commemorative Task Force partnered with the Constant Arts Society and Vancouver Moving Theatre / Heart of the City Festival to create and install the carvings in the park on the northeast side of the new field house.

Head carvers Chief Henry Robertson (Haisla Nation) and Wes Nahanee (Squamish Nation) designed and carved the logs, which had been recovered from Stanley Park after the 2006 wind storm. Over several months, community members watched and sometimes participated as the carvers transformed the logs into carvings that reflect different Coast Salish traditions and honour the diverse First Nations' presence in the neighbourhood.

The carvings were blessed on 6 November 2010 during the Heart of the City Festival with a ceremonial moving of the poles, music, dancing, a feast, and the Canada Council award presentation to Christine Germano (Artistic Director of Constant Arts Society) for her work with First Nations.

A community celebration marked the installation of the two carvings on the east site of the field house in the park on 16 February 2012.

Oppenheimer Park has long been a gathering place for area residents and visitors alike. Indigenous people who live in Vancouver and those from across Canada visit the park for many celebrations and ceremonial events every year.

The ceremonial planting of a western red cedar and the installation of two new carvings are welcoming elements in the park. They both welcome visitors by creating a focus that acknowledges Coastal First Nation's historical traditions.

Many stories of hardship and economic disadvantage, labour tension, and struggles for social and racial inclusion have originated around Oppenheimer Park. These stories are important historical legacies of the community.

The Oppenheimer Park Commemorative Task Force is currently exploring project options that will reflect the labour and community history of exclusion, perseverance, and resistance in the Downtown Eastside.

On 19 September 2011 the new legacy Sakura Windows were installed in the park field house with a haiku poem and text that explains the significance of the trees, visible on the northeast side of the building.
The text reads:

They show no resentment. The lines on the faces of the Issei people are softened by a kind of acceptance, their slowing movements touched with quiet dignity. With them will go much of the colour and epic quality which makes an era memorable . . . The Issei carved a foothold in a new world.
E. Henmi, A Dream of Riches: The Japanese Canadians, 1877-1977

Many of us gained strength from the presence of the trees in the park during our lengthy redress struggle in the 1980s. It has remained for me a crucial memorial site in the postwar reclamation of our history, dignity, and pride. For the Japanese Canadians whose citizenship rights were abrogated and who were dispossessed, the trees embody their once tangible historical presence in a section of Vancouver formerly known as Nihon-machi or Japantown.
Roy Miki, poet and writer, 2008

Before 1942, Oppenheimer Park was the centre of a thriving Japanese Canadian community known as Japantown. On April 16, 1977, with the support of the City of Vancouver, Issei (First Generation) Japanese Canadian seniors completed the planting of 21 Sakura (flowering cherry trees) in the Park to celebrate the 100th year anniversary of Canada’s first known immigrant from Japan. The 1977 Centennial plantings recognized the Japanese Canadian heritage in the area and the trees remain as living reminders for future generations.

The Japanese Canadian community living around Oppenheimer Park, originally known as Powell Street Grounds, established the Asahi baseball club by 1914. Before disbanding in 1941, the Asahi won multiple championships in Vancouver’s senior amateur and industrial leagues, and in the eleven Pacific Northwest Japanese Baseball tournaments held in Seattle between 1928 and 1941.
Over the years the team became a symbol of Japanese Canadians’ struggle for equality and respect after the Japanese internment and resettlement during and after the Second World War.
On 18 September 2011 an unveiling of a Parks Canada plaque, which commemorates the national historic significance of the Asahi Baseball Team took place in the park. The plaque will be permanently installed in the park.

The Oppenheimer Park Commemorative Task Force is made up of representatives who are currently living in the community and others who have an historical affiliation with the area.