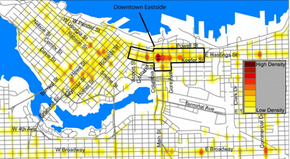 A 2009 study by researchers at Simon Fraser University and the University of British Columbia found that a small strip in the DTES was the most dangerous place for pedestrians in Vancouver and that 10% of all pedestrian injuries happen in this neighbourhood.

To tackle this safety threat, the Great Beginnings Program team engaged with DTES residents to

The DTES Pedestrian Safety project aimed to provide good health and safety across all sectors of the DTES population. A partnership between the City and the non-profit Vancouver Area Network of Drug Users (VANDU) set out common goals and integrated responses to pedestrian safety along Hastings Street.

As a result of this project, the City of Vancouver:

VANDU and the City of Vancouver presented the Pedestrian Safety report at an international forum on Urban Health in New York City on 25 October 2010, highlighting the success of participatory research projects between government funders and citizens.

The Vancouver Area Network of Drug Users (VANDU) is a group of users and former users who work to improve the lives of people who use illicit drugs through user-based peer support and education.