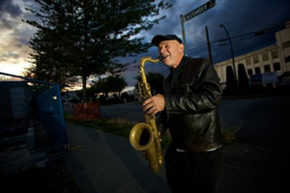 Spatial Poetics is an annual event held during the Powell Street Festival.

At the 2009 Spatial Poetics, BC-based Asian Canadian artists collaborated on the creation of interdisciplinary artworks in alternative locations.

Their chosen locations in the Downtown Eastside included the following:

Soo and Korsrud’s work Drawing Line emerged from Soo’s conceptual notion of drawing sonic lines through space. Crossing through Japantown, this performance explored metaphorical and geographic division and alignment through musical drawings. Six saxophonists performed across several city blocks in a trajectory that split up and bridged space. Musicians passed phrases from one to the next up and down the line. Each musician mimicked and expanded upon the musical phrase performed by the preceding musician. As the line traversed space, the improvised phrase became increasingly abstract and complex.

In Iuchi and Routhier's Coastal Calls, the transient Orca passed through familiar and unfamiliar territories. As a kind of avatar, the whale represented the duality of dislocation and communion that embodied cultural and linguistic migrations. At once dislocating and familiar, the sounds and visions invoke cultural immersion and exchange. Coastal Calls spoke to the current state of shifting global populations and the increased awareness of human impact on environmental conditions.

Join us this summer

The Powell Street Festival is an annual celebration of Japanese Canadian arts, culture and heritage that features something for everyone.

It's the largest event of its kind in Canada and the longest running community arts festival in the Lower Mainland.