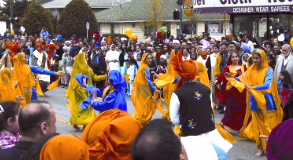 Celebrates the leadership of those who support inclusion and advocate for communities to be free of racism and discrimination.

Consideration will be given to applicants whose work supports equity, social justice, anti-discrimination, diversity and inclusion as it pertains to equity-denied individuals and communities across intersecting identities including ethnicity, disability, age, ancestry, sexual orientation, religion, gender identity, and socioeconomic status.

Robin Holmes is a Social Sciences student at Langara College, and an important advocate for gender equity and trans rights on campus. As a trans, gay man he is a rare gem of a person who can connect with others on an interpersonal level regardless of background or belief system.

He is president of the Langara Pride Society, an avid volunteer, and dedicated presence in the Office for Student Engagement. He's been instrumental in working with others on campus to identify, discuss, and address issues such as gender identification on college forms and gender-specific bathrooms on campus.

As a New Student Engagement Ambassador, Robin has been integral to the success of this new pilot program that helps new students feel welcome and adjust to life on campus. His warm, welcoming, and engaging demeanour draws people to him online and in person. Whether presenting at a Parent and Support Orientation, engaging in casual conversation with a group of students, or talking one-on-one, Robin is gentle and inclusive; finding ways to make others feel appreciated and heard, particularly when it comes to sharing his experience or educating them on what gender and cultural diversity and inclusion mean and how it should look in practice.

Robin is a valued resource, community-builder and leader for LGBTQ+ youth and everyone on the Langara campus and beyond.

Michelle Nahanee is a creative director, mentor, innovator, decolonizing facilitator, and Indigenous change maker from the Sḵwx̱wú7mesh community Eslha7an. She's been instrumental in leading conversations that increase awareness and understanding related to decolonization and reconciliation. Michelle has facilitated Decolonizing Practice workshops at community foundations, gatherings, festivals, and conferences impacting hundreds of Vancouver residents. She has trained a team of facilitators who are helping to share this journey more broadly.

In her work, Michelle speaks of the Sḵwx̱wú7mesh teachings of chénchenstway - the act of lifting each other up and supporting each other. In the words of one of her nominators, “This is how Michelle lives her life – lifting up those around her, meeting individuals where they are at in their personal journeys, and shaping a future for this city…”

Michelle designed a life-sized “snakes and ladders” style board game and workshop called Sínulhkay and Ladders, providing a framework for developing decolonizing practices. Through this and her many other efforts and work with clients such as Simon Fraser University and HCMA Architecture + Design, Michelle demonstrates her role as an important community and thought leader.

Migrante BC was formed in 2008, as a grassroots organization to protect and promote the rights and welfare of Filipino migrants, immigrants, and refugees. It's developed further as a source of information, community organizer, cultural promoter, and advocate for ensuring that Vancouver is a safe and equitable place for all residents.

The organization provides a temporary shelter, peer counselling, and paralegal services for temporary foreign workers, students, and others who need a short-term safe space to stay. They organize community activities, workshops, and conferences, and have been integral with allied organizations in several high-profile human rights and migrant worker legal cases as well.

In addition to many of the supports Migrante BC offers, they have participated in academic research, been active in politics, and worked closely with other organizations to build Vancouver’s civic capacity within the immigrant community.

They've also developed “arts as therapy” programs and opportunities for the Filipino-Canadian community in Vancouver utilizing dance, visual arts, and other mediums to provide outlets for creative expression, cultural expansion, and socialization. Migrante BC has improved the quality of life for Vancouver residents through their sustained grassroots efforts addressing access to migrant rights, citizenship rights, social services, and their genuine desire to help make Vancouver better for everyone.

How we honour diversity

We recognize and value the contributions of the diverse communities that make Vancouver one of the most livable cities in the world.