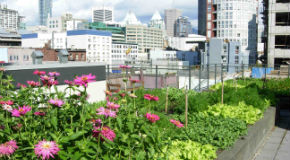 Recognizes those who have made significant contributions to advancing our goal of becoming the Greenest City in the world.

Whether they help protect our climate, reduce waste, support local food or enhance our natural spaces, these award recipients are environmental leaders.

As a student at Lord Byng Secondary School, Jolina Li has been a leader in promoting appreciation for nature through advocacy and action for the environment.

Three years ago she founded the Earth Lovers Club, which does a weekly litter clean up around Lord Byng’s neighbourhood including a nearby elementary school’s playground. The Earth Lovers Club also takes responsibility for keeping three catch basins in the area clear of debris to ensure rainwater flows into the ground instead of flooding roads, and is working on a project to reduce and hopefully ban single-use plastic items in their school’s cafeteria and replace them with biodegradable alternatives.

They've supported reducing garbage that reaches the ocean by participating in beach clean ups and others in the downtown area. In addition, the club is working on a project to create awareness of global issues like plastic pollution by developing an education program for elementary students that focuses on promoting recycling and understanding the importance of throwing waste in the correct bins.

Jolina’s commitment to the environment and community involvement has been rounded out with volunteer roles at Stanley Park, Science World, Big Brothers Big Sisters of Greater Vancouver, and fundraising for girls’ education in Northern Ghana.

As a registered nurse, working primarily in seniors care homes, Ian Li is all too aware of how easy it is for an independent older adult to suddenly become unable to remain in their own home due to a fall or inability to access every day services. As a result, he created a web platform called Anjel and an accompanying volunteer service that enables seniors to get free grocery delivery by volunteers from local grocery stores at in-store prices. The program was piloted through Mount Pleasant Neighbourhood House in 2018 and has become an invaluable service for this potentially vulnerable community, providing access to fresh food.

Ian finances the project himself, and has recruited a team of volunteers who are often a rare point of human contact for some seniors living on their own. This project has a number of benefits that cut across multiple Awards of Excellence categories including Accessible City, Healthy City, and Greenest City Leadership, by making fresh food more physically and financially accessible for seniors, cultivating connections among residents, and reducing waste. Anjel helps seniors living on a fixed income eat healthier.

Thanks to Ian and the other volunteers, more seniors are able maintain their independence and continue a healthier and greener lifestyle.

As a local, non-profit organization, the Hua Foundation undertakes important work to make space for those not usually at the table in environmental and climate efforts as it works to advance social change and build resilient communities by empowering youth in the Asian diaspora. It was founded ten years ago as Shark Truth, a globally recognized awareness, education, and action for sharks project, with a focus on cross-cultural conservation. It's saved over 8,000 sharks and prevented over 80,000 bowls of shark fin soup from being consumed.

Buoyed by the success of that project, the founders recognized an opportunity and need to expand their reach and focus to be an active voice in the food movement, along with environmental and climate efforts. With a small, dedicated staff and team of active and vibrant volunteers the Hua Foundation undertakes projects that advance green solutions for cultural communities. Their work includes: