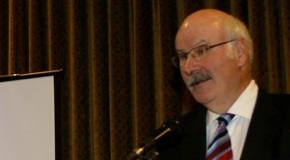 The 2017 Freedom of the City award has exceptional significance for honouree Mike Harcourt. The former premier of British Columbia, mayor of Vancouver, and city councillor ost some of his freedom due to a a six-metre fall in 2002 that left him partially paralyzed.

However, as true leaders are known to do, Mike developed a new resolve to turn his tragedy into triumph. He became actively involved in spinal cord research and education, working with the Rick Hansen Man in Motion Foundation on International Collaboration on Repair Discoveries (I-CORD), and chaired the Spinal Cord Injury Quality of Life Advisory Group.

When he served as Vancouver’s mayor from 1980 to 1986, Mike played a prominent role in establishing Vancouver as one of the world’s most liveable cities through effective land-use planning.

In his role as the province’s 30th premier from 1991 to 1996, he had many noteworthy achievements including safeguarding more than 12% of the province’s land base, resulting in 500 newly-protected areas. He also created the BC Treaty Commission, the province’s neutral body for facilitating treaty negotiations among the governments of Canada, BC, and the province’s indigenous groups.

Mike is a published author, community activist, lawyer by trade, and former BC Treaty Commission federal commissioner – an appointment that directly resulted from his passionate support of indigenous economic development.

His awards to date include: