We selected two designs, which we used to create about 3,000 manhole covers. 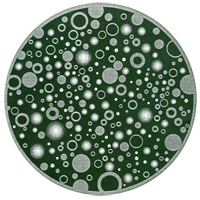 Jen Weih is a multi-media artist who works with installation, sculpture, video, and sound.

Jen graduated from Emily Carr Institute of Art and Design in 1999, and subsequently worked as the exhibitions and programming coordinator at the Video In.

She established Signal and Noise, Video In's annual festival of video and sound, and initiated the Mercury Theatre, a series of open air video and audio events, first presented for Swarm 2003. Her own work has been exhibited nationally and internationally. 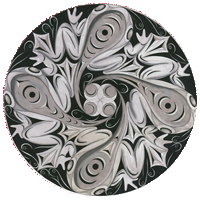 The mother/daughter team of Susan A. Point and Kelly Cannell are Vancouver-based Coast Salish artists who work in a variety of media.

Point is a recognized master carver, and has completed numerous major commissions, including work for the Vancouver International Airport, the UBC Museum of Anthropology and the Smithsonian.

Cannell has incorporated painting and wood carving with traditional Coast Salish elements in her work.

She was commissioned by Canadian Airlines to create the logo for their team’s shirts in an international world airline road race, has collaborated with her mother on screen prints, and has worked on a number of her own private commissions.

We are installing separated sewer lines to replace the combined sewer system. Find out why we are separating them.

What you can do