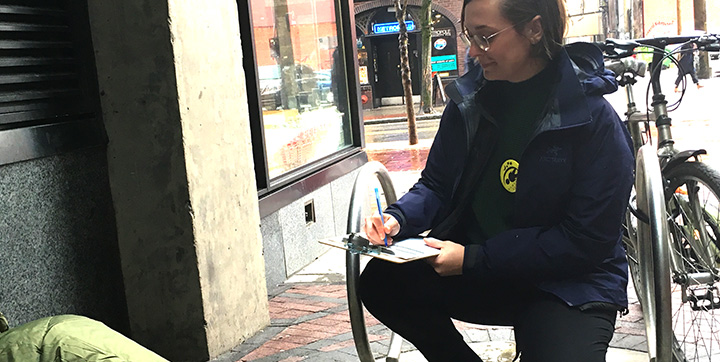 Homeless counts have taken place across the Metro Vancouver region every three years since 2002. The City of Vancouver started conducting an annual count in 2010. Each year, the count takes place throughout the city over a 24 hour period in March, inside shelters during the evening, and on the streets the next day.

Although counts do not give us a full picture of the extent of homelessness, the counts provide critical information on the number and characteristics of the homeless population, and how this population has changed over time.

Volunteers play a key role in homeless counts. Each year we recruit and train over 400 volunteers to participate in the count. This involves conducting a brief anonymous survey with people who are homeless.

The Homeless Count logo is provided by the Homelessness Services Association of BC (HSABC) External web site, opens in new tab . HSABC was established through a merger of GVSS and Shelter Net BC.

Its mandate is to strengthen and unify services across BC that are addressing the needs of persons experiencing homelessness.

This year’s homeless count took place in shelters on March 3 and on the street on March 4 all day. Thank you to everyone who volunteered – we couldn’t have done the count without you.

The results will be out later this spring.

The Homelessness Services department presented the results of the count to Vancouver City Council on June 12, 2019.