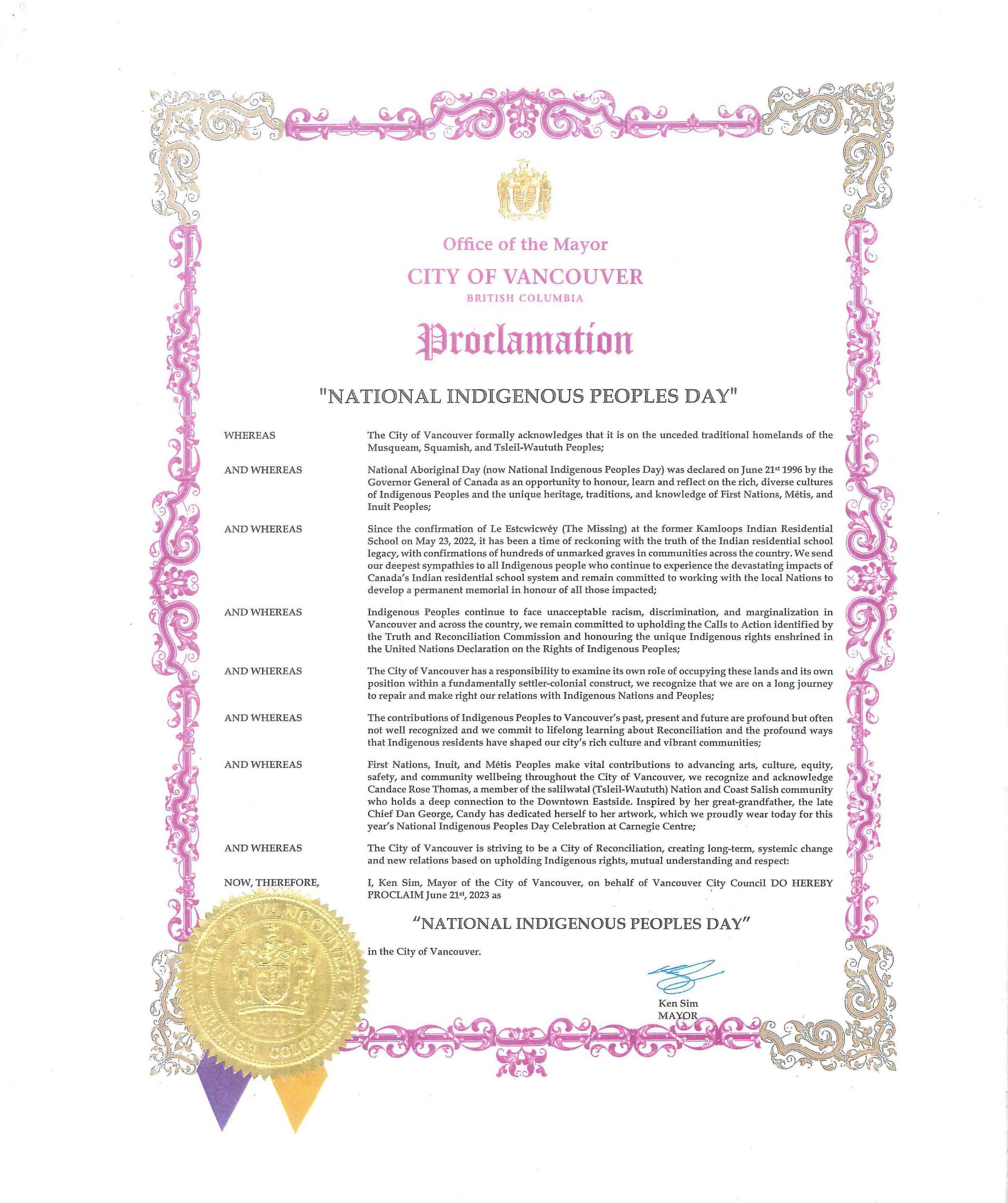 The Governor General of Canada proclaimed June 21 as National Indigenous Peoples Day in 1996, an occasion for Canadians to come together, reflect on and celebrate the unique heritage, traditions, and knowledge of First Nations, Inuit, and Métis Peoples.

We are deeply grateful for the xʷməθkʷəy̓əm (Musqueam), Sḵwx̱wú7mesh (Squamish), and səlilwətaɬ (Tsleil-Waututh) Nations who have continued to inhabit and steward these lands every day since time immemorial.

We are also grateful for the contributions of Urban Indigenous community members, past, present and future, in shaping our city. The artwork for National Indigenous Peoples Day 2022 was created by Sam McKay, a Nisga’a artist and long-time DTES resident.

Sam was born May 17, 1948, in the village of Laxgalta'ap formally known as Greenville Nass River British Columbia. He was exposed to Northwest Coast Art at an early age by his grandfather Sam McKay on his father Elbert McKay's side of the family. He was also informed that he had a couple of uncles from the past who were great carvers; Simoogit Ni'ismuut on his mother Phyllis McKay's side of the family, and Patterson McKay who is his father's brother. Northwest coast art has always been his passion and he finds spiritual solace as well as its healing energy.

Sam is continually finding ways to hone his artistic ability. In 2013, he completed a two-year course at the Freda Diesing Northwest Coast School of Art in Terrace, British Columbia. His determination and meticulous ability to carve masks, bowls, paddles and wooden spoons lead him to another ambition; his dream is to develop his own style of art and open his own art studio. In July 2017, he completed an eight-month course in Northwest Coast Jewellery Arts at Native Education College in Vancouver, British Columbia.

He feels that his responsibility is to carry on the legacy that was freely given to him. He also believes that learning is a gift from the Creator, and that it is not complete until it is passed on. That is the teaching from his grandfather and his goal.

The Carnegie Community Centre, in partnership with the UBC Learning Exchange and the City, is hosting an in-person event with live streaming on Tuesday, June 21 from 12 to 3 p.m.

There will be a variety of giveaways and performances – including tea from Hives for Humanity, crafts created by Cultural Sharing Elders, and live performances - including the Carnegie’s own lexwst’i:lem drum group, John Sam and the Big Drum, Larissa Healy, and much more.

For the month of June we’re flying 16 Indigenous flags on City Hall’s flag island at 12th Ave and Cambie St. Flags from the xʷməθkʷəy̓əm (Musqueam) Indian Band, Sḵwx̱wú7mesh (Squamish) Nation, səlilwətaɬ (Tsleil-Waututh) Nation will fly next to the National Indigenous Peoples Day flag designed by Sam McKay, in recognition that we are located on these Nations’ traditional, ancestral and unceded territories.

Additional flags that will fly are:

Canada’s Indian residential school system and other ongoing colonial structures and policies continue to cause deep-rooted grief, trauma and loss. As a City of Reconciliation, we remain committed to upholding the Calls to Action identified by the Truth and Reconciliation Commission.

For information about our work in this area, review our most recent Reconciliation report PDF file (528 KB)

How you can listen, learn, act

All settlers on this land have a responsibility to understand and address the ongoing impacts of colonization. We encourage residents to learn more about First Nations, Inuit and Métis communities with the following resources: