We recognized the following projects for their outstanding contribution to visionary thinking and design excellence. 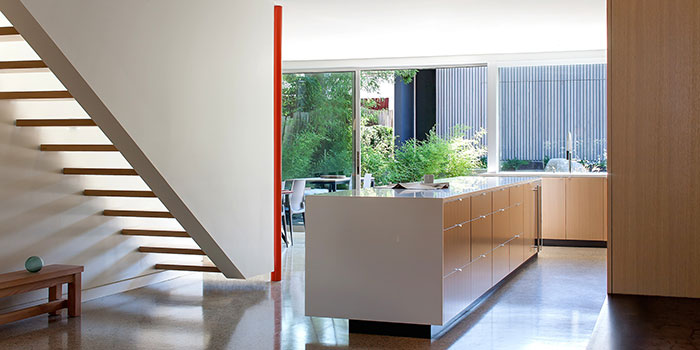 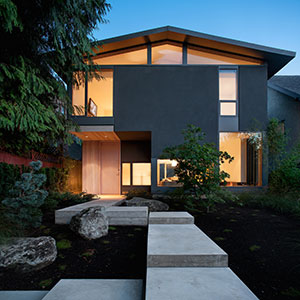 430 House serves as a beautiful example of the retention of an iconic Vancouver building form. This project has broader building implications with its reuse of the “Vancouver Special” through the preservation of form and simpler materiality. The restrained and detail oriented design provides a strong dialogue between new and old. By maintaining the silhouette and providing a clear volumetric expression at the front of the house, 430 House is both respectful and a good fit within the neighborhood context. The rear of the house provides an elegant relationship to the outdoors in part by removing its former car-centered focus.

Multi-story residential buildings and stacked townhouses up to six storeys 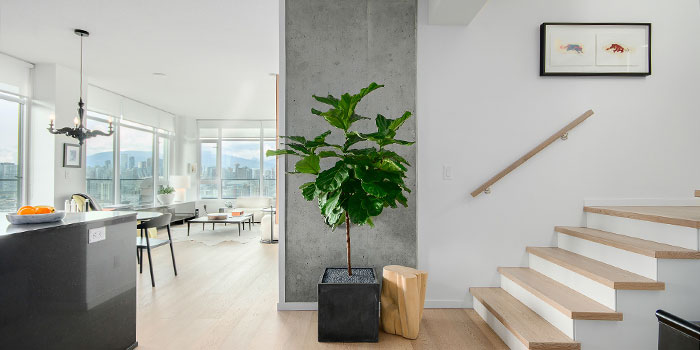 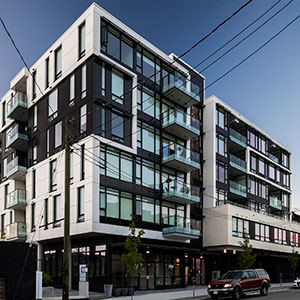 133 E 8th Avenue is an innovative and refreshing example of mid-rise design and construction. The unit mix, layout, and orientation provide industry with an example of how projects should be considered in Vancouver. The design of the dual aspect suites on two levels is inventive, increases liveability, and responds well to local climate conditions, while maintaining views for occupants. The articulated façade reduces the overall mass of the project and allows it to read as a finer scaled building while being complementary to a more rugged and gritty context. 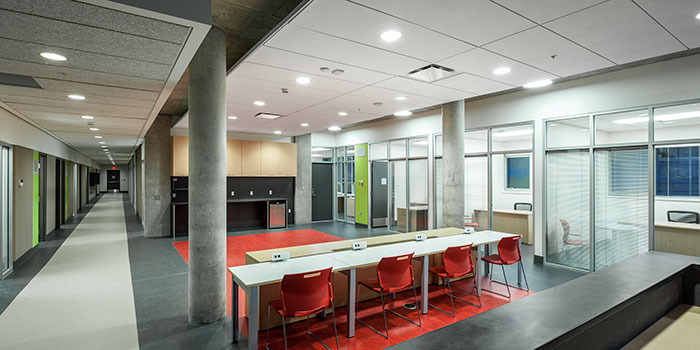 Kwayatsut is excellent response to the urban context at Fraser and Broadway. This building provides a new landmark for the area with a well-considered, singular, cohesive statement while also providing much needed social housing and programming. The project can be appreciated from all four sides with its active sun shading on the south and attention to detail throughout.

Industrial, office, warehouse, retail, and mixed-use buildings with <50% residential use 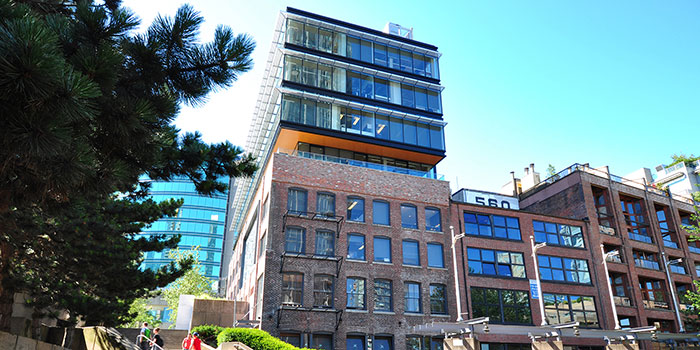 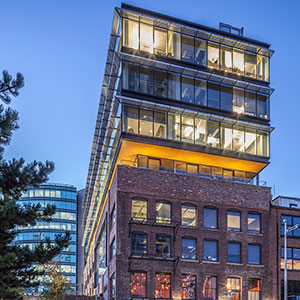 The four-storey addition to 564 Beatty has a restrained simplicity that sets up an articulated foil for the three storey heritage base. The replication of the footprint in the new construction provides two independent volumes and the reveal successfully separates the new from the heritage. The successful south face restoration has improved the life and richness of the plaza while fostering appropriate contextual planning. Overall, the resolution is both simple and elegant, complementing the existing street pattern and acting as a gateway to Beatty Street.

Government and institutional building
PREV   NEXT 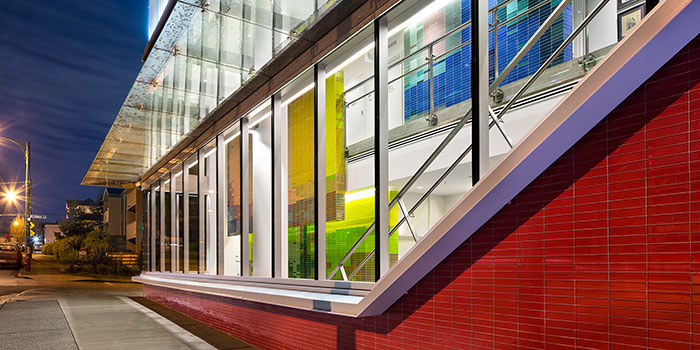 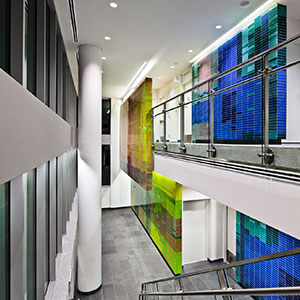 York Theatre is unique in its design, conception, and intervention. The glazed wall provides a transparent and legible connection to the street, programmatically strengthening the public appreciation of the role of the theatre in the local culture. The new lobby acts as the face of design and brings the sense of architecture into the community. The restored theatre has broadened opportunities for theatre art by increasing the number and diversity of venues in the city.

Achievements in design, building technology, response to context, use of materials, and sustainability 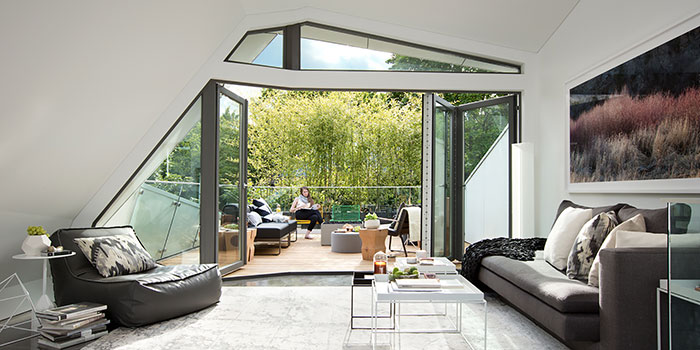 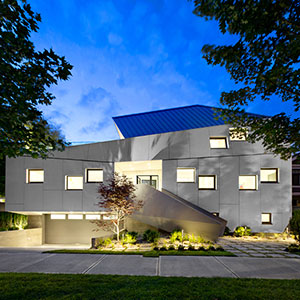 The Vanglo House is a provocative response within the context of prescriptive and constraining site and bylaw conditions. Its sculptural form provides a refreshing sense of place and contributes positively to the streetscape. The intentional volumetric design of this project resonates as an imaginative architectural statement and a compelling discussion piece while providing creative urban living space.

Buildings that demonstrate the principles of urban sustainable development 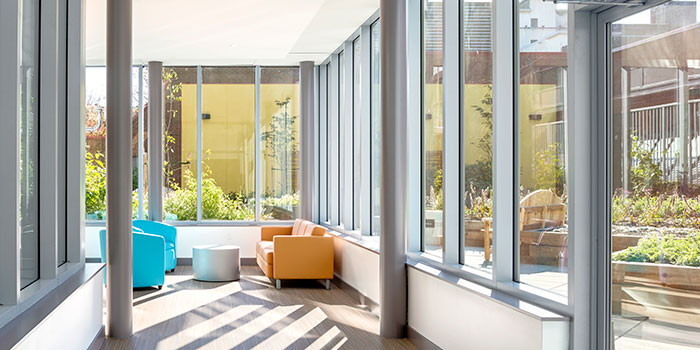 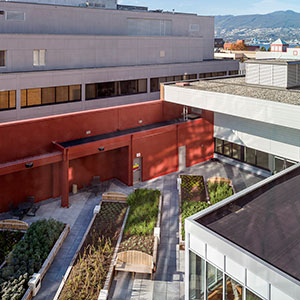 250 Powell is an outstanding socially and environmentally sustainable project. The positive message of social transformation is illustrated through the transformation of a former jail into a dignified and affordable housing environment. The project is an outstanding example of collaboration between various levels of government, non-profit organizations, and the design community.

Open spaces that contribute to the public realm 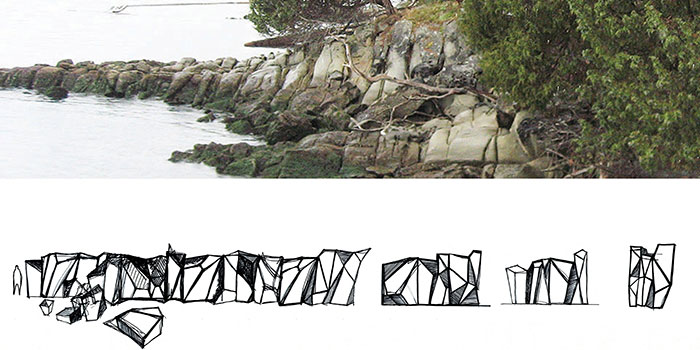 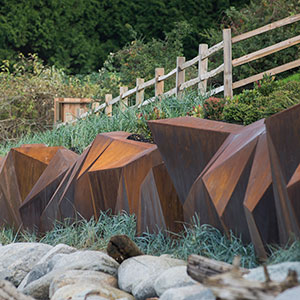 Metamorphous is a stunning example of the integration of infrastructure and land art. The rusted barnacles are an inspired technical solution to a functional problem. 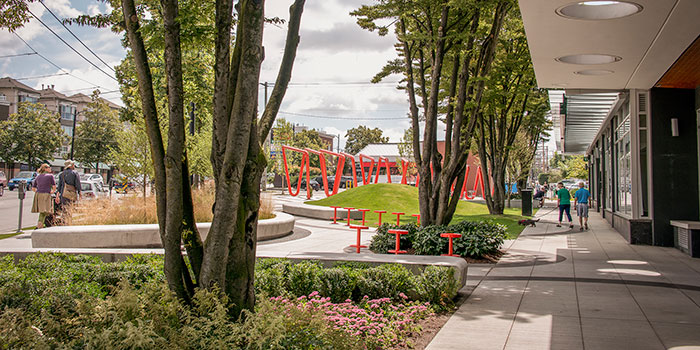 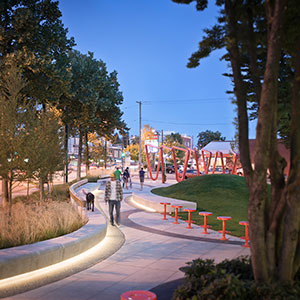 Mid-Main Park’s Bendy Straw Trellis is an element of wit and fun that infuses the site with a playful energy. It engages the local community in a spirit of joy. 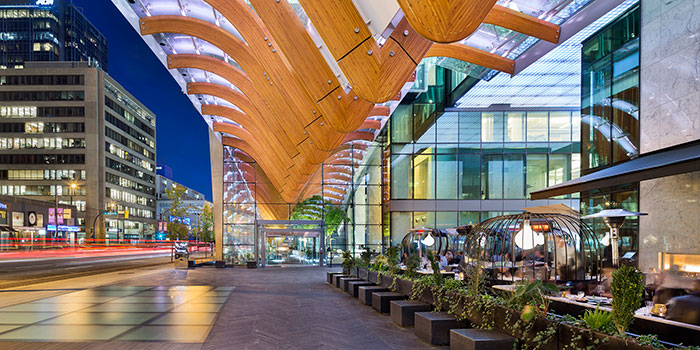 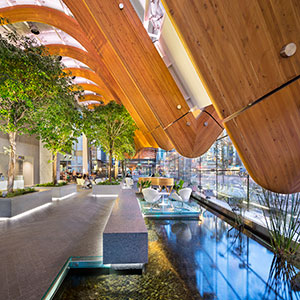 TELUS Garden Office’s glass and glulam pavilion was a skillfully handled sculptural element. The contribution to the street and connection to the laneway greatly enhance the urban experience of Vancouver. 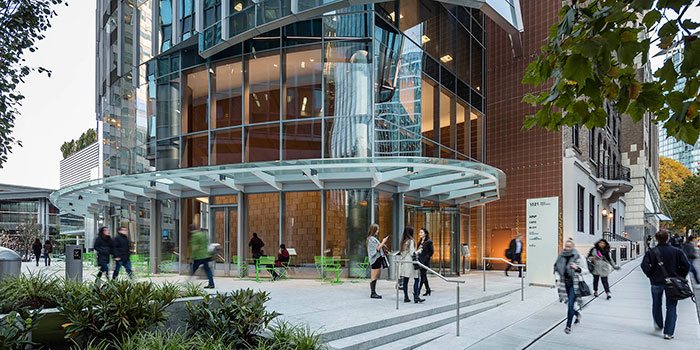 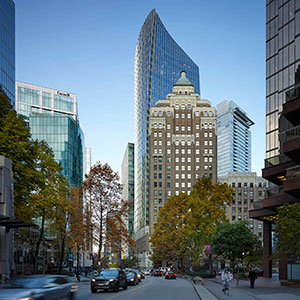 MNP Tower provides an excellent reflection of the context through materiality, rich simplistic shape, draping skirt, and engaging ground plane. It provides a quiet and respectful response, greatly improving the street view, and enhancing the back drop to the Marine Building. 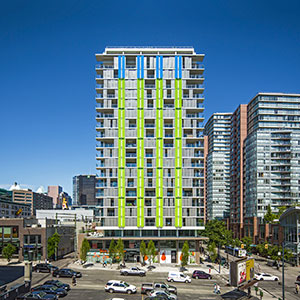 999 Seymour building responds well to the unique conditions of directionality on each building aspect. Consideration for views, privacy, solar, and neighbourliness, as well as the operable sun shading on the south façade, make this project both rational and livable. 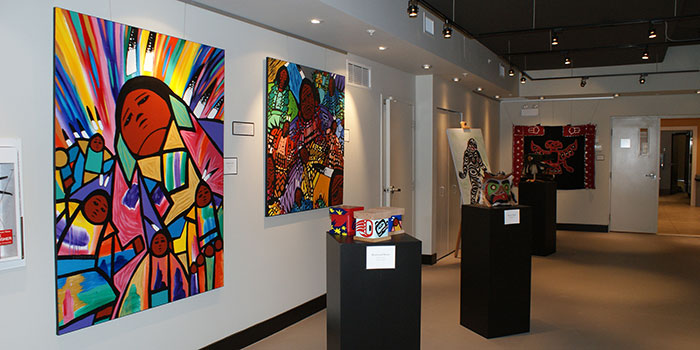 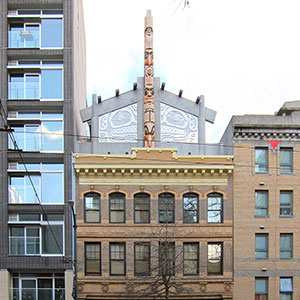 Skwachàys Healing Lodge powerfully positions Aboriginal culture within this historical precinct of Vancouver. The project balances the social and cultural fabric of the First Nations elements within the city. The cultural elements of totem and longhouse are set back but still have noticeable prominence at the top of the building, as well as street presence with the continuation of the totem at grade. The original heritage building’s elements have been beautifully restored while the diversified building programming provides operational and social sustainability. 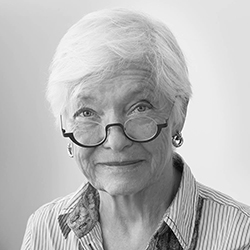 She has worked in a variety of locations throughout British Columbia, as well as in Indonesia and China. Jane has won several awards connected with her work and in 2008 was the recipient of the YMCA Woman of Distinction Award for Arts and Culture. As an active member of the design community, Jane has sat on design panels in Vancouver and Ottawa. 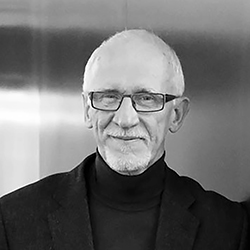 Roger Hughes formed Roger Hughes Architects in 1976, a firm that has evolved over four decades to become HCMA Architecture + Design. His work has focused on leveraging the power of design to contribute to a strong, healthy, and socially diverse society. He has led innovative residential, civic, and urban design projects, focusing on each project's potential to impact society.

His firm and work have been recognized with numerous national and international awards including six Governor General's Awards from the Royal Architectural Institute of Canada. He is a current and past member of the Vancouver Urban Design Panel, the Shaughnessy Design Panel, and has been a guest critic at the UBC School of Architecture. He was made a fellow of the RAIC for his contribution to design excellence in 1995. In 2015, he was awarded the AIBC Lifetime Achievement Award. 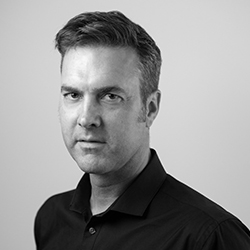 Scott Romses is principal of Romses Architects, a Vancouver studio which explores and seeks innovative memorable solutions for projects of various scales and complexity. His firm has established a strong reputation for urban design and master planning projects both locally and abroad. He has also explored areas such as urban agriculture and vertical farming, sustainable planning, and green design, exemplified in his award-winning prototype for a vertical farm.

Scott has taught at the School of Architecture at the University of BC and received numerous awards for his work in Vancouver, Los Angeles, and China, including ones for the City of Vancouver’s International Ideas Competition ‘FormShift’ and for a new city master plan for Huangxi, China. He has worked on various urban and building design projects throughout China and was also recently the acting chair of the City of Vancouver Urban Design Panel. 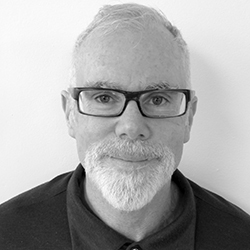 As the principal owner and director of the Pechet Studio, Bill Pechet has over 25 years of experience in art and architecture. His projects have included: cemetery plans, memorials, public art, parks, plazas, lighting, street furnishings, interior exhibitions, stage sets, and houses.

Some of his local works include the Granville Street Redesign and Lighting, False Creek Energy Centre Stacks (with Pechet and Robb Art and Architecture), Dichroic Vancouver, the restoration of the Jewish section at Mountain View Cemetery, Ponte Bong, Big Chairs, and GRANtable.