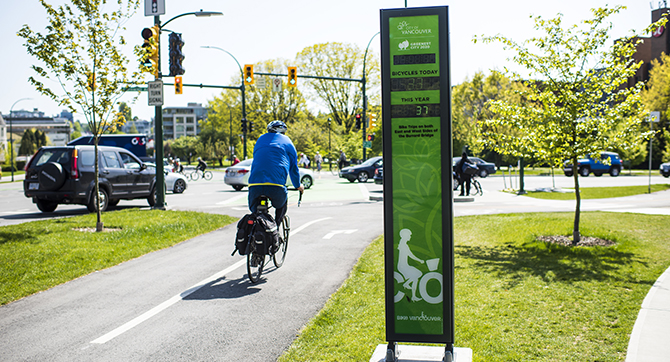 We use various methods in determining traffic quantity and characteristics around the city.

The methods can be categorized into these types:

Traffic count data helps us make traffic management decisions, such as when to implement:

For all other issues, including anything related to the above infrastructure, please contact 3-1-1.

Reporting a damaged or disconnected counter

The survey acts as a travel diary where individuals record the trips that they make on a given weekday. This trip data was then compared to previous panel surveys conducted from 2013 to 2019, allowing for analysis of transportation trends.

Learn more and read past reports

We request that third parties interested in installing counting equipment on City streets contact us at transportationdata@vancouver.ca for transportation data related enquiries and to report damaged counters.

Equipment installed by third parties that had not been agreed upon in writing by us may be removed without notice.

No personal information is collected as part of our traffic count data collection efforts in adherence to BC's Freedom of Information and Protection of Privacy Act.